Exclusive Interview | A Cure for Cancer in a Year, Hype or Fact?

At the beginning of 2019, a story initially reported by Jerusalem Post and picked up by Forbes and other major international news outlets was making the rounds. The headlines read “An Israeli Company Claims That They Will Have a Cure for Cancer in a Year”. This caused an uproar. Criticism, outrage, and accusations flooded in towards the Israeli biotech company Accelerated Evolution Biotechnologies Ltd., or AEBi, which was founded in 2008 and had not yet held any clinical trials.

“Although one can always find something new, it’s highly unlikely that a company has developed something that is going to cure all cancers within a year. I mean, it’s just not plausible,” said Dr. Benjamin Neel, the director of the Laura and Isaac Perlmutter Cancer Center at NYU Langone Health.

Did AEBi announce that it will launch a mysterious treatment that can completely cure cancer within a year? Or was it taken out of context by the media? What is the inside story? One year later, will AEBi deliver satisfactory answers?

MyBioGate will take you to the center of the controversy and have an exclusive interview with AEBi’s CEO and founder Dr. Ilan Morad to find the true story. 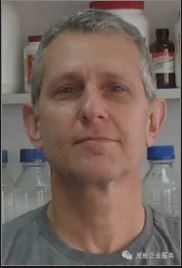 Investors Stayed Away After the Media Turmoil 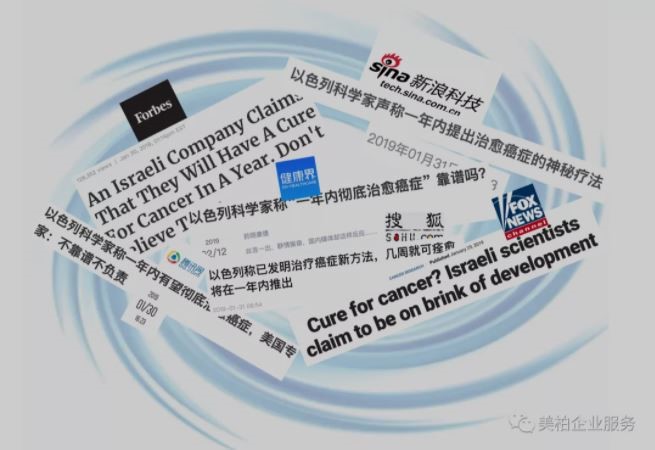 Dr. Morad never expected that after accepting the initial media interview that the story would continue to spread all over the world in just a few days, causing an uproar. However, this undesirable strong exposure put AEBi in trouble.

Dr. Morad recalls: “People started attacking us, thinking that we were being cruel and irresponsible to cancer patients. At the same time, investors were keeping away from AEBi. This made the situation harder for our startup. Even though we were already under peer review, people turned a blind eye when we published experimental data in journals. They didn’t want to hear anything about our company.”

Over the past year, AEBi had a lot of difficulties until the storm of public ire gradually calmed down and the misunderstandings gradually disappeared. Investors once again gave AEBi the opportunity to show test data to objectively evaluate whether or not AEBi’s technology had the potential to be used in cancer treatment.

Of course, the media reports were not groundless.

Dr. Morad believes: “This misunderstanding stemmed from the fact that we did not make it clear that AEBi is still in the stage of developing the first product. If there is sufficient financial support, the first clinical trial can be started immediately within a year. A cure for cancer is the ultimate goal we want to achieve, but this is based on whether AEBi’s first drug candidate would have a good effect or not. The data speaks for everything.”

As a scientist, it is understandable that he wants to be confident and even ambitious in his research. But how far is the distance between the ideal and reality?

The Brothers Dared to Dream and Dared to Act, Spending 20 Years Studying Problems of the Century

Speaking on his original intention of engaging in cancer research, Dr. Morad said, “The existing anticancer drugs are not friendly to patients and do not fully meet the needs of the market. Cancer recurrence makes patients fearful and some refuse to accept treatment. So people have spent hundreds years trying to find a cure for cancer, but no one has been successful in completely curing it.”

With the determination to accomplish something no one else had, Dr. Morad went to Columbia University where he received his PhD in chemistry, then continued his studies at Harvard Medical School. He has been working in the cancer industry ever since. In 2000, Dr. Morad established his own company, AEBi, in an incubator in Israel. In 2006, he successfully built a new screening platform for combinatorial biology. In the past 14 years, the MuTaTo© platform has owned a number of patents and has had stable partners.

About five years ago, AEBi launched a new project called “Cure Cancer”, which aims to discover anti-cancer molecules that are different from existing drugs to treat cancer, bring about more personalized medicine, and propose a Muti-Target Toxin concept, abbreviated as MuTaTo©.

Dr. Morad says: “The MuTaTo© platform can help us screen out peptide compounds for different targets and combine with cytotoxins to achieve multi-molecular connections. The spatial structure looks like an “octopus”. Peptides are internalized into the cancer cells, and the cytotoxins then kill the cancer cells.”

This idea is similar to the “cocktail therapy” for the treatment of AIDS; the combined use of three or more antiviral drugs reduces the failure of individual drugs that normally occur due to virus mutations, thus successfully minimizing virus replication. By combining three different peptide compounds and targeting three different targets at the same time, even when a cancer mutates it cannot easily evade these drugs’ anti-cancer effects.

Considering that different patients have different cancer targets, what AEBi wants to achieve in the long run is to perform a biopsy of cancer cells to analyze which specific cancer targets are in the body (usually receptors overexpressed on the surface of cancer cells) in order to give a customized treatment plan for each patient.

Dr. Morad added: “Our current research and development goal is to bring this concept to the clinic, and we have been working hard to raise funds for clinical trials. In February this year, we published a paper in the Journal of Cancer Therapy: Systematic Introduction of R&D Concepts.” 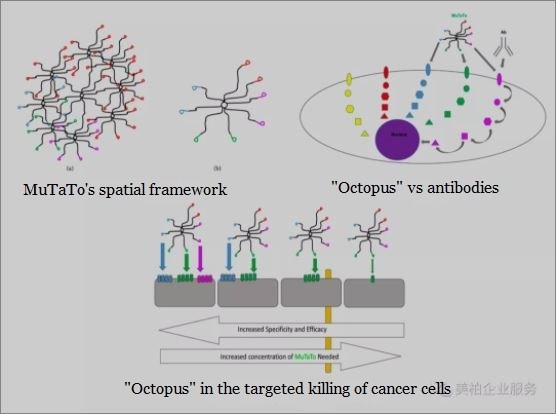 AEBi recently completed preclinical trials showing that in lung cancer samples from mice that highly express EGFR, PD-L1 and cMet receptors that were intravenously injected with MuTaTo (including anti-EGFR, PD-L1 and cMet peptides), compared with the control group, cancer cell growth was significantly inhibited and no deterioration in mouse health was observed. 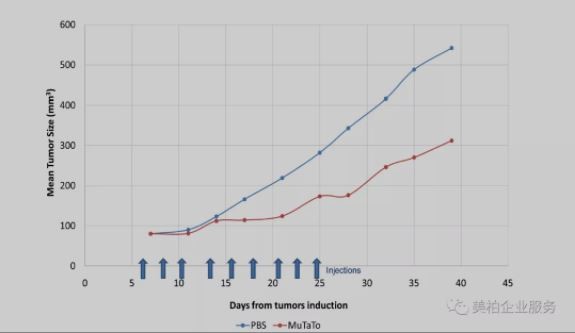 MuTaTo© has the following advantages:

2) Use the “Trojan Horse” strategy to attach toxins to drugs. Toxins are inert outside the cell, only after the drug enters the cancer cells can it work.

3) Spatial flexibility: Because the multi-molecular structure of the drug is spatially flexible, it helps to penetrate solid tumors.

4) Low immune response: The drug will be a solid structure composed of small peptides and a lack of elastic scaffolding; the possibility of inducing an immune response will be minimized.

5) Affinity effect: all components of the drug can be connected. This will double the level of interaction between the drug and cancer cells, thereby greatly improving the efficacy and reducing adverse reactions due to high doses.

When it comes to clinical applications, Dr. Morad pointed out that “there are now Japanese and Canadian hospitals offering us an olive branch for clinical trials, but first we need to finance our first clinical trial.”

At the same time, Dr. Morad also optimistically estimated: “If the production is done in advance and the permutations and combinations are made according to the patient’s situation, the patients will be able to get their own anti-cancer drugs within a few weeks. Our goal is to complete 100 explorations of cancer targets. If we need to address three targets for each cancer, the permutation and combination of 100 peptide compounds will cover up to 1 million cancers, covering almost all cancer types. Of course, for rare cancer types our company will customize personalized treatment drugs, and the time will be extended.”

In the conversation with Dr. Morad, it is not difficult to feel that he has a sincere vision for the MuTaTo platform to treat cancer. His frequent use of the the questionable word “cure” is what attracted such strong media attention.

In the current media era, both individuals and companies are at risk of being falling in the face of public opinion. Fortunately, AEBi has been able to continue to verify the potential of MuTaTo in cancer treatment and overcome obstacles in the midst of that negative public opinion.

Whether it is an ideal or reality, everything speaks by the data. We hope that AEBi can start the clinical trial as expected and submit more conclusive data. We will wait and see.

Xu Ziyi is an investment analyst at MyBioGate and a PhD student in the Department of Chemistry at Boston University, majoring in chemical biology and drug delivery systems. One of the founders of the Boston University Biotechnology Business Club and a member of the Tufts Biotechnology Business Club, she is active in the pharmaceutical science industry in the Greater Boston area.

Dr. Ginger, Director of Investment Analysis of MyBioGate, and senior advisor for the Texas Medical Center and Columbia University Consulting Club. She has worked at the Howard Hughes Medical Institute and MD Anderson Cancer Center. While there, she participated in the preclinical research of tumor brain metastasis and received funding from the National Institutes of Health RO1, Susan G. Komen, and Japan’s Oncoheroes, as the first biotechnology company focusing on the field of children’s oncology drugs, received 1.1 million US dollars from the “Dreamer Startup Fund” in February this year. It has raised a total of US$5 million to continue to promote the company’s first drug candidate, Volasertib Development in clinical trials (current clinical phase I).

Author: Xu Ziyi Editor: Ginger Ding   In the first half of this year, in addition to new coronavirus-related...