At the end of 2020, as IPOs and China cross-border transactions reached a record high, Overland Pharmaceuticals announced joint ventures with ADC Therapeutics and Allogene. This announcement occurred just a week after Overland’s debut.

The two co-founders of Overland Pharmaceuticals are Hua Mu and Ed Zhang. They both are venture partners at Hillhouse Capital.

This is reminiscent of LianBio launched by Perceptive Advisors, a well-known hedge fund. Lianbio was also founded by an elite team (CEO Dr. Li Bing + President and CBO Yu Jiujun, MD), starting off with an external program, and quickly established a partnership with Pfizer. However, in terms of collaboration models, Overland Pharmaceuticals chose a more in-depth joint venture instead of the more standard licensing-in. This move officially opened a new chapter in China cross-border joint ventures.

With the vigorous development of innovative drugs in China, companies are gradually taking a global vision. Collaboration between innovative Chinese companies and overseas companies occurs frequently, and with the model receiving upgrades when necessary. With the support of Hillhouse, the collaboration between Overland and ADC Therapeutics/Allogene may give birth to an upgraded version of VIC (VC+IP+CRO). Has the joint venture model officially entered the 3.0 era? 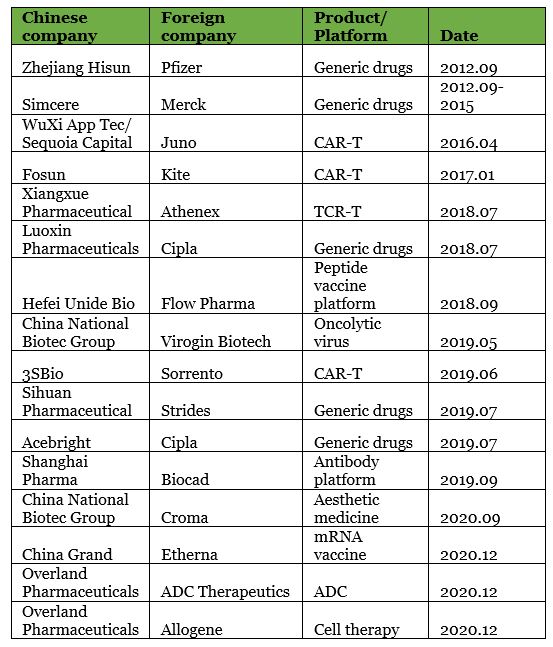 According to the IMS Health research report, an average of 35% of patents at the top 20 pharmaceutical companies in the world expired between 2009 and 2013. From 2011 to 2015, a total of US$100 billion of patented drugs expired. Eli Lilly alone had 6 product patents expire. 2012 was a veritable cliff with a total of US$40 billion US dollars of patented products that expired. Among them, there were many blockbuster drugs, such as Pfizer’s Lipitor, BMS’ Plavix, and Eli Lilly’s Zyprexa.

▲ Some drugs with expired patents around 2012

In 2015, China began to pilot its new marketing authorization holder system (MAH). Under this system, MAH and Production Authorization Holders (PAHs) can be the same or different entities.

China officially joined ICH in 2017, making it the eighth regulatory agency. This means that Chinese local pharmaceutical companies could enter international competitions, making it urgent for them to improve their innovation capabilities. On the other hand, in order to encourage new drugs to enter China, the CFDA, which had not yet been renamed at that time, issued the “Regulations of the State Food and Drug Administration Decisions on Matters Related to the Administration of Imported Drug Registration (Draft for Solicitation of Comments)”. In this, overseas clinical trial data could be accepted for registration in China.

These two important milestones provided an opportunity for China’s pharmaceutical innovation to be in line with international standards. Around the same time, there was another high-impact event in the pharmaceutical industry: Novartis and Kite’s CAR-T were approved, setting off a global CAR-T competition. Promoted by multiple events, WuXi AppTec and Fosun partnered with CAR-T companies Kite and Juno, establishing joint ventures in 2016 and 2017.

At this stage, the majority of joint ventures in China still mainly occurred at pharmaceutical companies who covered R&D, production, and commercialization. Fosun and CNBG were two such companies.

Due to the implementation of centralized procurement, pharmaceutical companies in China went through a downturn for several years. However, their systemic advantages have gradually emerged, and have slowly returned to the innovation stage. Pharmaceutical companies committed to innovation and transformation not only enrich and deepen their pipelines by recruiting talents and products, but by establishing joint ventures with advanced technology platforms to achieve sustainable development.

One of the major drivers of the 3.0 model is venture capital or private equity (VC/PE). More and more venture capital and private equity firms are actively participating in healthcare sector. In the first half of 2018, the pharmaceutical industry ranked third in the industry with 283 PE-VC financing cases. From 2014 to 2017, the compound growth rate of the number of PE-VC financing companies in the pharmaceutical industry was 20.8 %.

In addition, a number of institutions with USD funds such as 6 Dimension Capital, WuXi Healthcare Ventures, Qiming Venture Capital, and Decheng Capital have also emerged.

For VC/PE, in addition to providing capital, it is important to help the portfolio company grow.

It is true that licensing-in can greatly fill the innovation gap with international companies. This model is widely welcomed by Biotech and has also helped a series of companies such as Zai Lab, Everest Medicines, and OcuMension to successfully go public. However, the recent blunder of EOC Pharma has caused public opinion to question the capital-driven licensing model:

Is licensing-in just a stepping stone for an IPO or does it increase the market cap?

Overland seems to be running on a good schedule. It has gained the trust of two partners (ADC Therapeutics and Allogene) and established China cross-border joint ventures, which is a deep collaboration model of sharing both benefits and risks. With Hillhouse directing from backstage, much could still lay in store for Overland.

Ginger Ding, PhD has served as cross-border partnering advisor for 15+ biotech or biopharma companies. She has a 10-year track record in biomedical research, and was an awardee of the Susan G. Komen grant in support of her pre-clinical studies at the MD Anderson Cancer Center.

Could NLRP3 be the next magic target: the exciting competition between startups and MNCs

Author: Dr. Ginger Ding   As a target of extensive research, NLRP3 is the culprit behind a long list of...