Could NLRP3 be the next magic target: the exciting competition between startups and MNCs

As a target of extensive research, NLRP3 is the culprit behind a long list of inflammation-related diseases including diabetes, gout, Alzheimer’s disease, NASH, inflammatory bowel disease, and atherosclerosis.

However, NLRP3 does not have a clear protein structure and, as shown above, involves many diseases. This inevitably makes it a challenge for pharmaceutical companies to start addressing it. Since its discovery in the early 21st century, so far only five NLRP3 drug candidates have entered the clinical stage, reflecting the difficulty of development.

The human immune system is the first line of defense against microbial invasion. NLRP3 is the key protein on this line of defense. When NLRP3 is activated by invading microorganisms, it can change the protein conformation, triggering the formation of large protein structures called inflammasomes, activating caspase 1 mediated IL-1β and other cytokines, and causing inflammation and apoptosis. 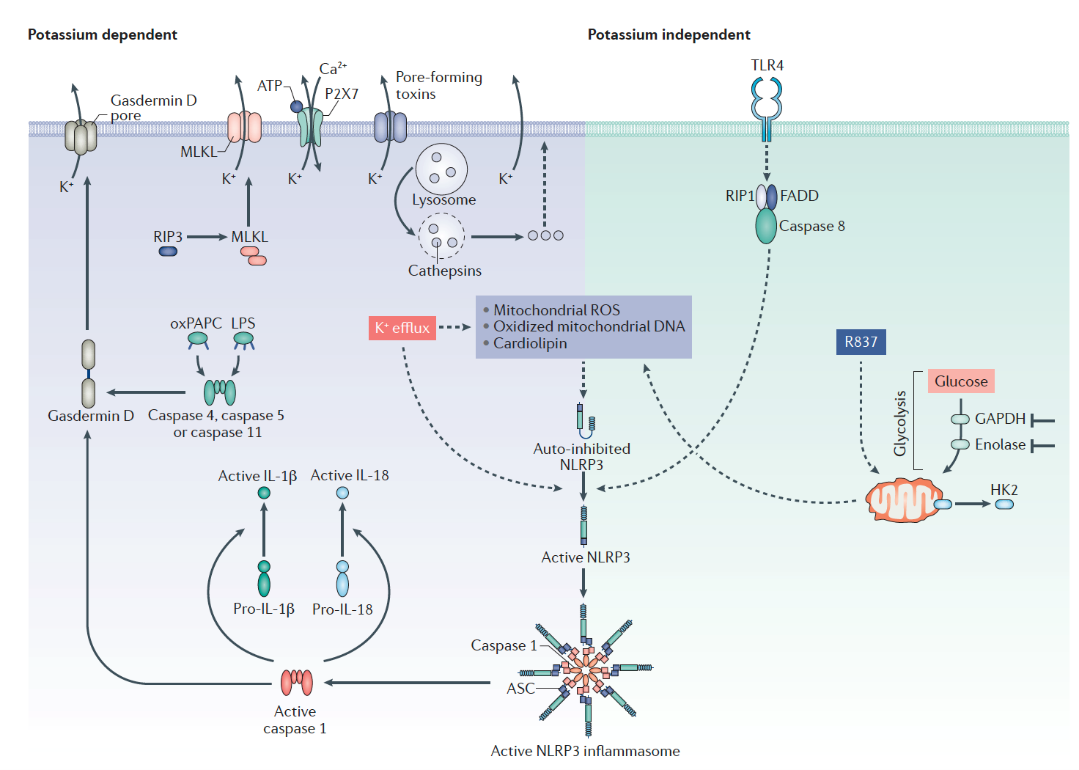 However, an overactive NLRP3 protein may be harmful to the body. In the past 10 years through use of animal models and patient NLRP3 gain-of-function mutation studies, scientists have found that it may be related to a variety of diseases.

Therefore, NLRP3 has naturally become one of the most attractive targets for drug development. 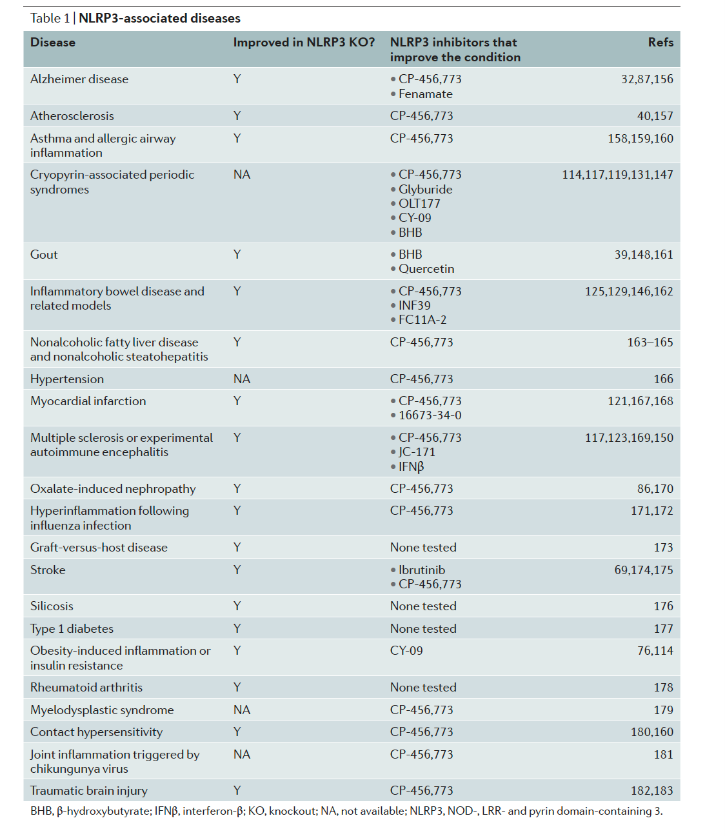 As mentioned above, although NLRP3 is a popular target, the development of targeted drugs is very difficult. Here, I take the MCC950 project as a case analysis.

Because there is no high-resolution crystal structure and the activation mechanism is uncertain, most of the existing NLRP3 inhibitors are through phenotypic drug discovery (PDD), including MCC950.

In the late 1990s, Pfizer scientist Chris Gabel tried to find compounds that could prevent immune cells from secreting IL-1β. During his research, Gabel discovered that the diabetes drug glyburide could prevent the release of IL-1β.

At the time, Pfizer hoped that IL-1β inhibitors could become blockbuster drugs for rheumatoid arthritis and other diseases. After continued research he developed a drug called CRID3. Unfortunately, CRID3 not only has a short half-life and weak efficacy, it also causes liver damage when taken in high doses. Thus, Pfizer put the project on hold.

Project consideration: The specific mechanism of action of glibenclamide and IL-1β is not clear, and there are side effects worth considering. The project was not yet mature at this stage.

It was not until 2007 that Mohamed Lamkanfi, a postdoctoral fellow at Genentech, rediscovered glibenclamide while looking for IL-1β inhibitors. Around 2007, the relationship between IL-1β and inflammasomes slowly surfaced, and studies have shown that gout, pulmonary fibrosis and other inflammations are related to the activation of NLRP3 inflammasomes.

Genentech quickly confirmed in 2009 that glibenclamide prevented the release of IL-1β by inhibiting NLRP3 (PMID: 19805629).

Project consideration: The mechanism of action is clearer. At this time, the biggest pain point is that glibenclamide is a weak inhibitor (IC50 in BMDM cells is about ∼10μM).

Inspired by Genentech’s research, Irish IL-1β expert O’Neill and Australian Matthew Cooper to pick up the CRID3 project that Pfizer had put on hold. They tested the ability of CRID3 to inhibit NLRP3. By 2012, it was fully confirmed that CRID3 (renamed MCC950, or Matt Cooper Compound 950) is a highly specific NLRP3 inhibitor with nanomolar potency (IC50 in BMDM cells is about 7.5nM).

Project consideration: Achieving nanomolar potency is a good starting point. The challenge at this stage mainly came from competition from large international pharmaceutical companies such as Pfizer.

It is very difficult to design highly specific NLRP3 inhibitors. Cooper knew that he could not compete with international pharmaceutical companies for resources. In order to gain the R&D window, Cooper did not immediately disclose the MCC950 results, and gave chief chemist Avril Robertson time to create hundreds of analogs to MCC950.

After three years of research, in February 2015, O’Neill and Cooper published their MCC950 research in the journal Natural Medicine and applied for two patents at the same time. Inflazome was founded non-stop in 2016.

In 2019, two important studies showed (PMID: 31086327 and PMID: 31086329) that MCC950 directly binds to Walker B motif in the NACHE domain of NLRP3, thereby preventing ATP hydrolysis and inhibiting NLRP3 activation and inflammasome formation.

Project consideration: At this stage, the development of NLRP3 had fully blossomed. Coupled with the strong endorsements of several major international pharmaceutical companies, I believe fast followers are ready to move. 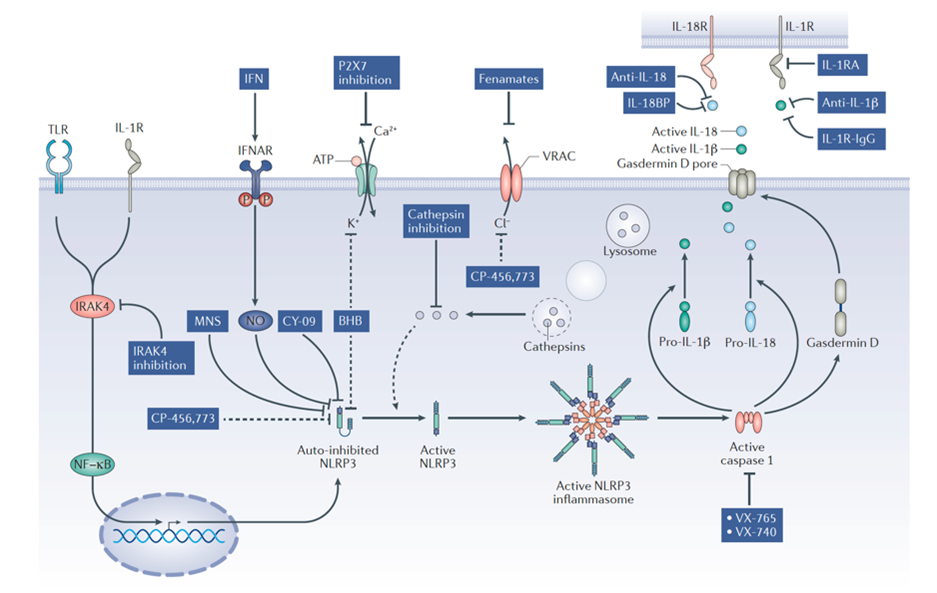 In addition to directly targeting NLRP3, IL-1β, as the downstream of the inflammasome pathway, seems to be a good choice. So far, at least three drugs targeting IL-1β have been approved, including Anakinra, Canakinumab and Rilonacept.

Who is the owner of these three drugs? It turns out that Canakinumab is owned by Novartis, so it is not difficult to explain why Novartis bought IFM Tre for US$1.575 billion.

Compared with NLRP3, IL-1β is obviously not the best choice:

So for Novartis, although sales for Canakinumab last year were US$670 million, with an growth of 21%, it has to take precautions to protect its position while further expanding. Apparently, a bet on NLRP3 inhibitor is a wise move.

Dr. Ginger Ding is the Director of Investment Analysis at MyBioGate and an advisor for the Texas Medical Center and Columbia University Consulting Club. She has worked at the Howard Hughes Medical Institute and MD Anderson Cancer Center. During the period, she participated in the preclinical research of tumor brain metastasis which received funding from the National Institutes of Health RO1, Susan G. Komen, and Taiho Pharmaceutical.