Magpie Pharmaceuticals develops the only new ALS drug in China

Masitinib mesylate was developed by AB Science. Its clinical indications include amyotrophic lateral sclerosis (ALS), Alzheimer’s (AD), mastocytosis, pancreatic cancer, multiple sclerosis, asthma, prostate cancer, and others. Among them, a new drug application for ALS was submitted to the US FDA in 2019. Masitinib mesylate had previously obtained orphan drug designation for the treatment of pancreatic cancer and amyotrophic lateral sclerosis in 2009 and 2015, respectively.

Masitinib mesylate is an effective multi-target tyrosine such as fibroblast growth factor receptor 3 (FGFR3), KIT proto-oncogene receptor (KIT), and prostate cancer platelet-derived growth factor receptor (PDGFR). It is also an acid kinase inhibitor. The drug modulates the activity of mast cells and macrophages by targeting a limited number of kinases.

Based on its unique mechanism of action, masitinib has been developed for the treatment of tumors, inflammatory diseases, and central nervous system diseases. Because of its immunotherapeutic activity, masitinib could improve the survival of cancer patients. By acting on mast cells and microglia to regulate inflammation and neurodegenerative processes, masitinib may be effective for symptoms related to certain kinds of inflammation, central nervous system diseases, and degenerative diseases.

In China, masitinib is in clinical phase III for the treatment of unresectable or metastatic stage 3 or 4 melanoma with mutations in the c-kit proximal membrane and metastatic colorectal cancer.

Since there is no cure for ALS, pharmaceutical companies are conducting R&D

Amyotrophic lateral sclerosis (ALS) is a rare progressive neurodegenerative disease. The incidence rate is about 2 out of 100,000 to 5 out of 100,000. Approximately 30,000 people have been diagnosed in the United States and approximately 15,000 in Europe. Most patients usually die of respiratory failure within 5 years after symptoms first appear.

ALS is still an incurable disease for the time being. Prior to this, the US FDA approved two drugs for marketing, namely riluzole and edaravone.

Riluzole can prolong a patient’s lifespan by approximately 2 to 3 months, but it does not relieve symptoms.

Edaravone can slow down the decline of daily clinical function in patients with ALS but there is no evidence that edaravone is effective for all patients with ALS. Edaravone is expensive to treat (in the US it costs approximately US$140,000 per year). Furthermore, patients receive medication frequently though intravenous infusion for up to one hour a day for two weeks for two days. They then pause the medication for two weeks.

Edaravone is a neuroprotective agent that helps restore nerves after acute cerebral ischemia and subsequent cerebral infarction. According to Tanabe Mitsubishi Pharmaceuticals’s annual report, the drug’s global sales from 2014 to 2017 were US$67 million, US$60 million, US$53 million, and US$52 million.

The FDA also approved the NeuRx diaphragm pacing system, which implants electrodes and battery packs to contract the diaphragm to help certain patients with ALS before the onset of severe respiratory failure.

At present, AQST-117 (riluzole oral tablets) is in the first echelon of research and development in this field. The drug was developed by Aquestive Therapeutics and was certified by the US FDA as an orphan drug for the treatment of ALS in 2018.

In addition, tirasemtiv is in phase III clinical study for the treatment of ALS. The drug obtained EU Orphan Drug Designation in 2012 for this indication. In the same year, due to this indication, it also obtained a US Express Entry qualification. 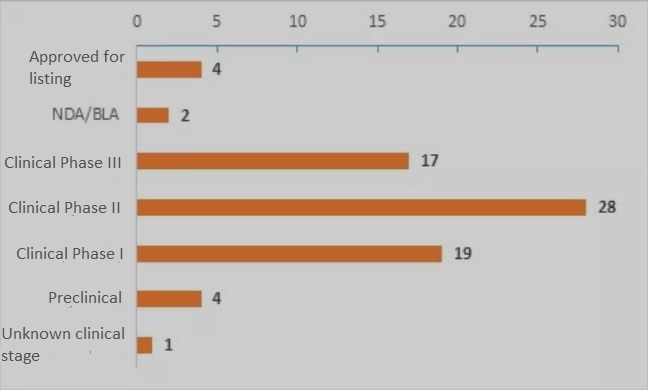 ALS research and development in China

Rare diseases are getting more and more attention from the government and domestic Chinese pharmaceutical companies.

The National Health Commission and five other departments jointly formulated the “First List of Rare Diseases” on May 11, 2018. This list included amyotrophic lateral sclerosis.

Among the drugs listed in Table 2, edaravone is the only innovative drug marketed in China. The drug was first marketed in Japan in 2001 and was approved by the National Medical Products Administration of China in July 2019, under the trade name Edarsen®.

Tetramethylpyrazine Nitrone is currently the only Chinese Class 1 drug under development for ALS. Nitrazine was jointly developed by Jinan University and Guangzhou Magpie Medicine. It is a brain-derived neurotrophic factor agonist, a cyclic adenosine phosphate response element binding protein stimulator, a proto-oncogene protein c-akt modulator and a calcium channel blocker. Currently it is in phase II of clinical research for the treatment of amyotrophic lateral sclerosis, diabetic nephropathy and stroke.

Guangzhou Magpie Pharmaceuticals completed series B financing on February 12, 2019. An investor engaged in the round of financing was Sangel Capital in Shenzhen.