Recently, I visited several senior executives of pharmaceutical companies in China. A large proportion of companies visited reported that they plan to in-license respiratory-related products and optimize product pipelines to cope with the impact of centralized procurement across the country. In order to find the reason behind such a large interest in the respiratory field, I take stock of respiratory drugs, especially asthma and chronic obstructive pulmonary disease (COPD) companies and products.

The global respiratory drug market is expected to reach US$30.7 billion in 2024. 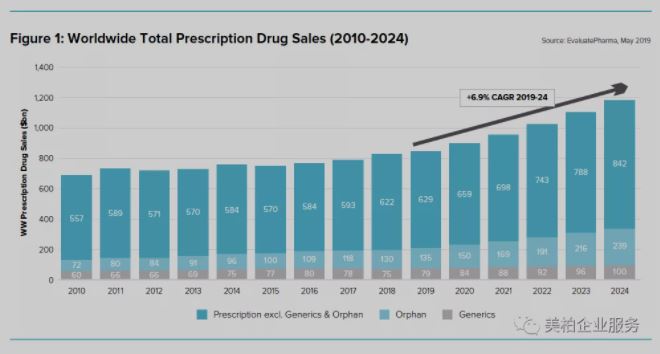 The 2018 global drug sales list data shows that bronchodilators, the main drugs to treat asthma and chronic obstructive pulmonary (COPD) respiratory diseases, had sales of US$28 billion in 2018, ranking sixth in the world. In 2024, the annual prescription drug market for these drugs is expected to reach US$30.7 billion, ranking 8th.

The report counts products that are in the clinical development stage (stages 1-3) or have already been submitted to the FDA in the United States. The data shows that the average R&D investment for respiratory drugs is US$9.2 billion. Due to the small number of respiratory products approved, the average R&D expenditure rose to US$32.1 billion US dollars, second only to 78.2 billion US dollars for oncology. 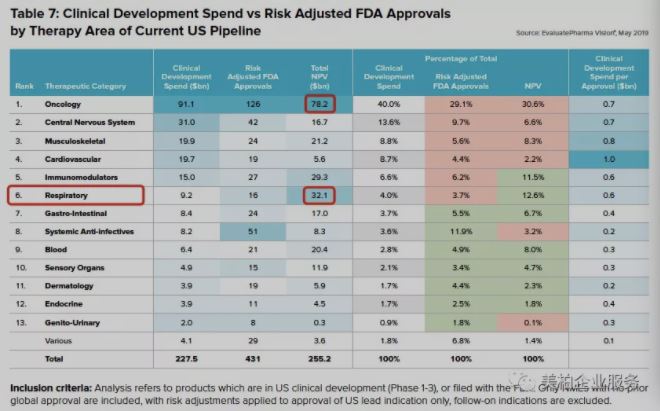 The chronic respiratory disease market in China has great potential 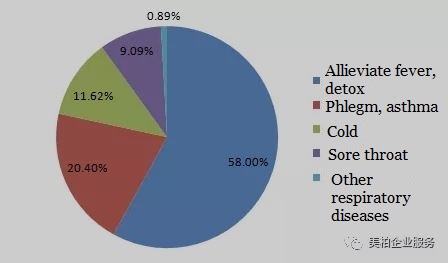 From the perspective of market segments, the following characteristics are presented:

Another category is chronic diseases such as asthma and chronic obstructive pulmonary disease (COPD), which have a longer treatment course. It is estimated that there are approximately 334 million asthma patients and 328 million COPD patients worldwide. Asthma is the second leading cause of death and disability in the world after cancer. In recent years, the prevalence of respiratory diseases has increased. 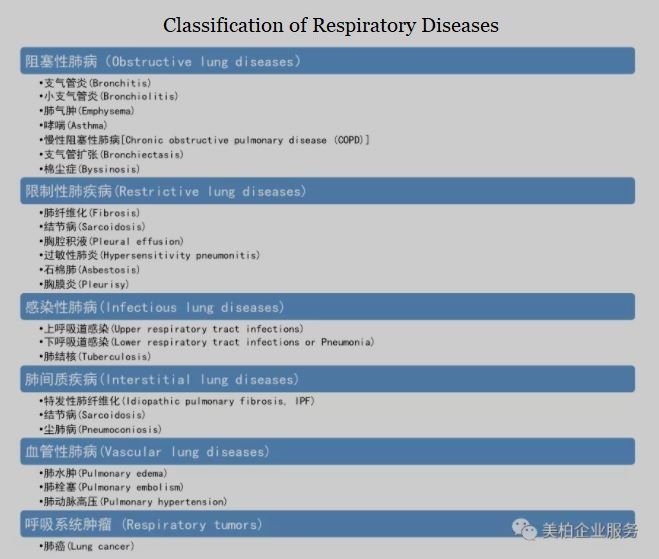 The difference between drugs to treat asthma and COPD

Pathogenesis and population differences between asthma and COPD 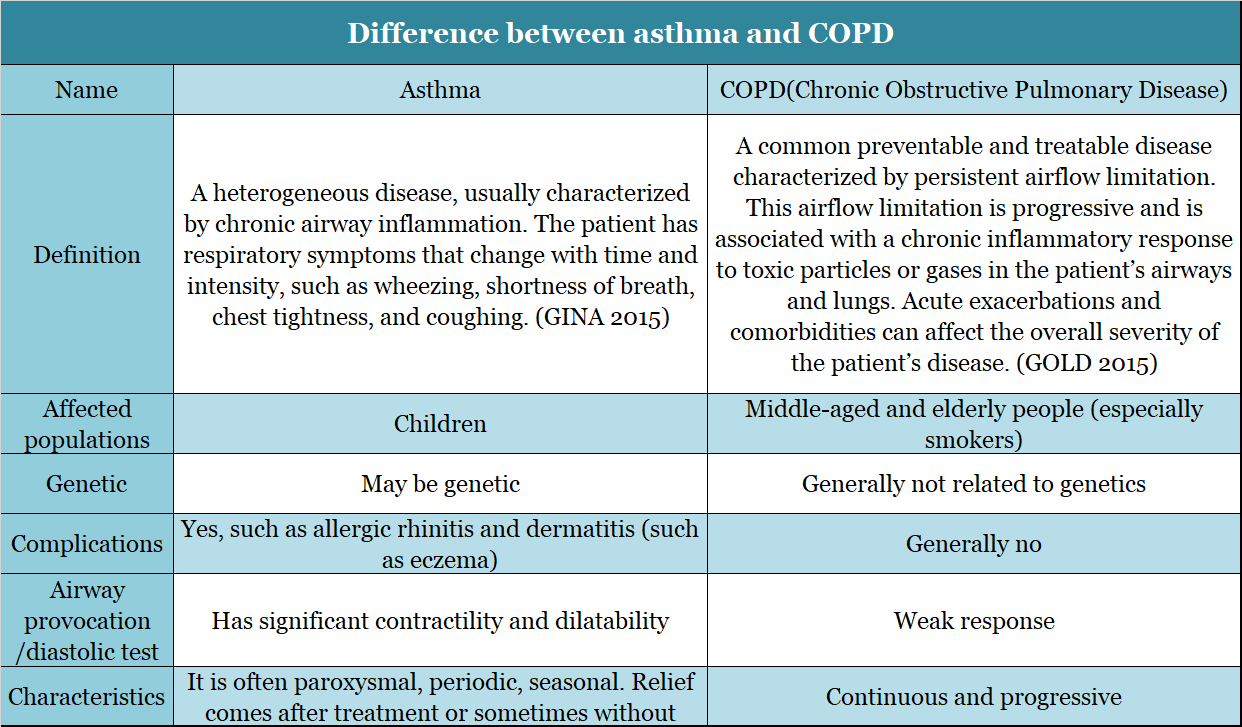 Bronchial asthma is not COPD, but COPD and asthma can occur in the same patient. In addition, some airflow limitation diseases with known causes or characteristic pathological manifestations, such as bronchiectasis, tuberculosis, and cystic fibrosis are not COPD. All diagnosis and treatment of COPD must refer to how the lung functions. After inhaling bronchodilators, FEV1/FVC<70% can be determined as persistent airway obstruction and airflow limitation (ie, COPD).

Comparison of drugs to treat asthma and COPD

According to the latest Global Asthma Prevention and Control Guidelines from GINA in 2019, asthma drugs are mainly divided into two categories: bronchial expansion and anti-inflammatory drugs.

The latest edition of the COPD Guide from GOLD in 2019 also shows that bronchodilators and glucocorticoids (ICS) are commonly used drugs. 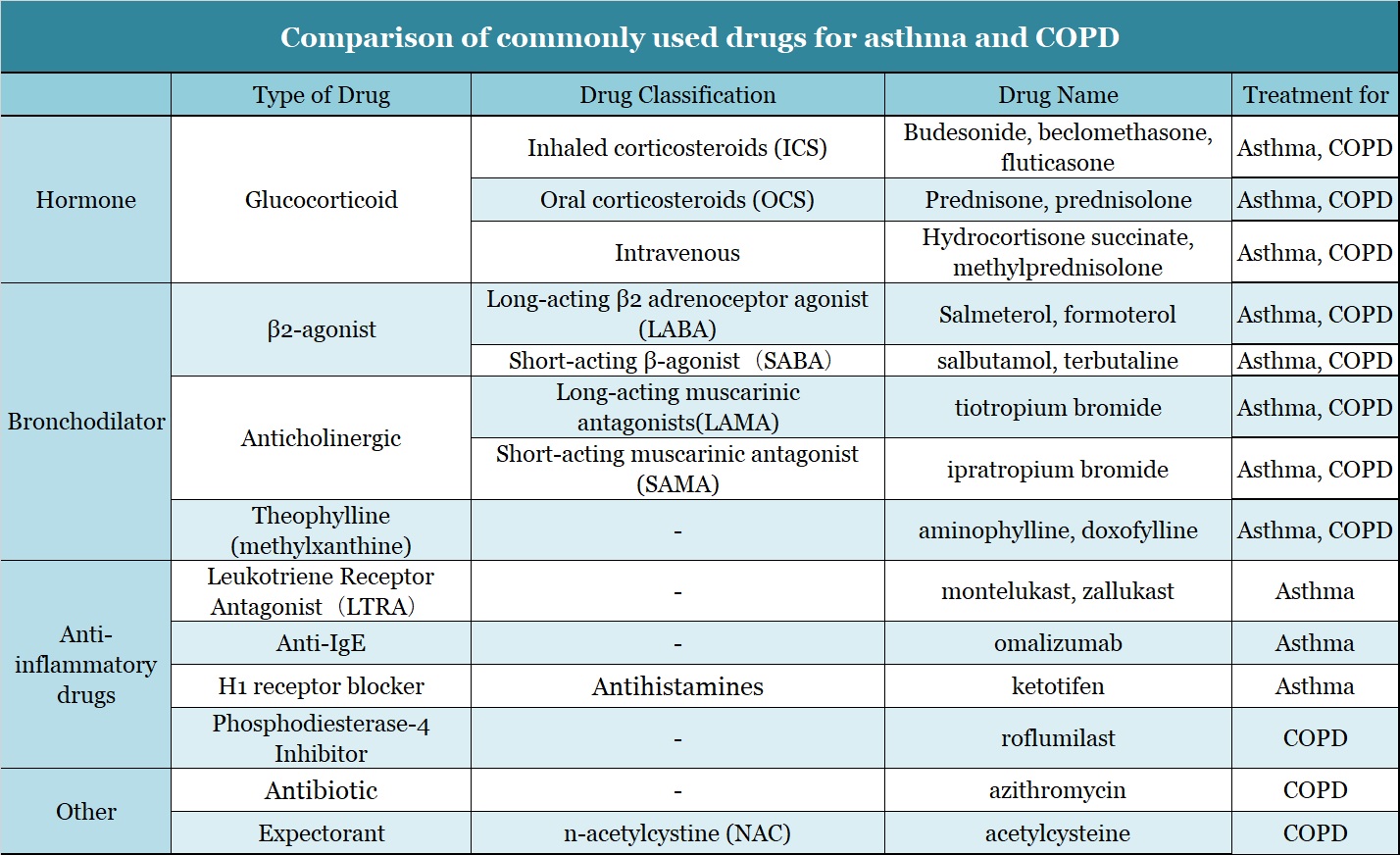 ▲Figure 9: Comparison of commonly used drugs for asthma and COPD

The domestic Chinese asthma and COPD medication market is about RMB 17 billion, with a CAGR of 14% from 2012 to 2018. According an analysis by Ping An Securities, the actual domestic respiratory system drug market in 2018 was about RMB 32.2 billion, an increase of 2.43%. Asthma and COPD medication was about RMB 16.9 billion, an increase of 9.57%. The market is estimated to be RMB 14.7 billion for asthma and RMB 2.2 billion for COPD. From the 2012-2018 CAGR, the use of asthma and chronic obstructive pulmonary (COPD) medications is as high as 14.19%, which is significantly higher than the respiratory system’s 9.14%. 【5】

The domestic drugs for treating COPD are mainly bronchodilators and inhaled corticosteroids. AstraZeneca’s budesonide (Pulmicort Ressu) ranked first in the sample hospital market with a market share of over 35% in the first half of 2019. At the same time, Chinese companies have followed the example of inhaled suspension formulations. On February 27, 2020, Chia Tai Tianqing’s respiratory drug “Budesonide Suspension for Inhalation” was approved by the State Food and Drug Administration. On July 21, 2020, Joincare Pharmaceutical’s “Budesonide Suspension for Inhalation” was also approved for listing. Furthermore, Eddingpharm B.V., a subsidiary of Eddingpharm, obtained the “fluticasone propionate aerosol inhalation suspension” produced by GlaxoSmithKline and was approved for listing in May 2020.

LAMAs hold the second largest sector of the asthma and COPD market. Boehringer Ingelheim’s Silva Spiriva (tiotropium bromide) was the world’s first inhaled COPD treatment drug. It reached about US$330 million globally in 2019, while its peak sales in 2012 were US$3.901 billion. The decline in profit was mainly due to the increasing market share of combination drugs and generic drugs. Chia Tai Tianqing’s tiotropium bromide generic drug (Tianqing Sule) had sales of about US$92 million in 2019. 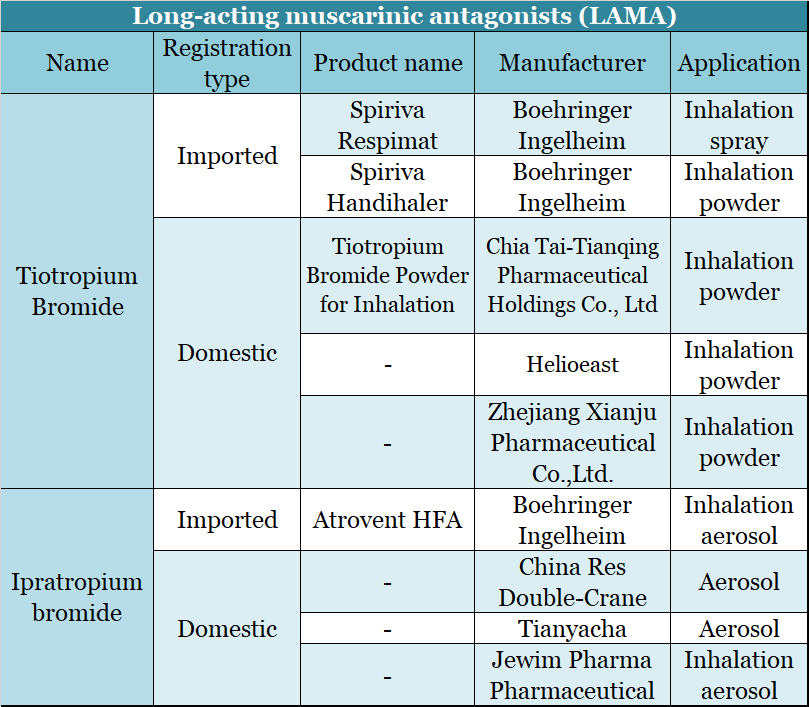 Currently, the three main ICS/LABA drugs on the global market are AstraZeneca’s Symbicort and GSK’s Seretide and Breo (not listed in China). The sales of these three drugs in 2018 and 2019 totaled US$7.230 and 5.952 billion, a decrease of 17.67%. However, more domestic Chinese companies have made breakthroughs and are starting to join the market. For example, on April 9, 2019, Joincare’s “Compound Ipratropium Bromide Solution for Inhalation” was approved for listing. GSK’s salmeterol ticasone is also under review as well as four generic listing applications from Jiangsu Hengrui Medicine and Tianyancha. 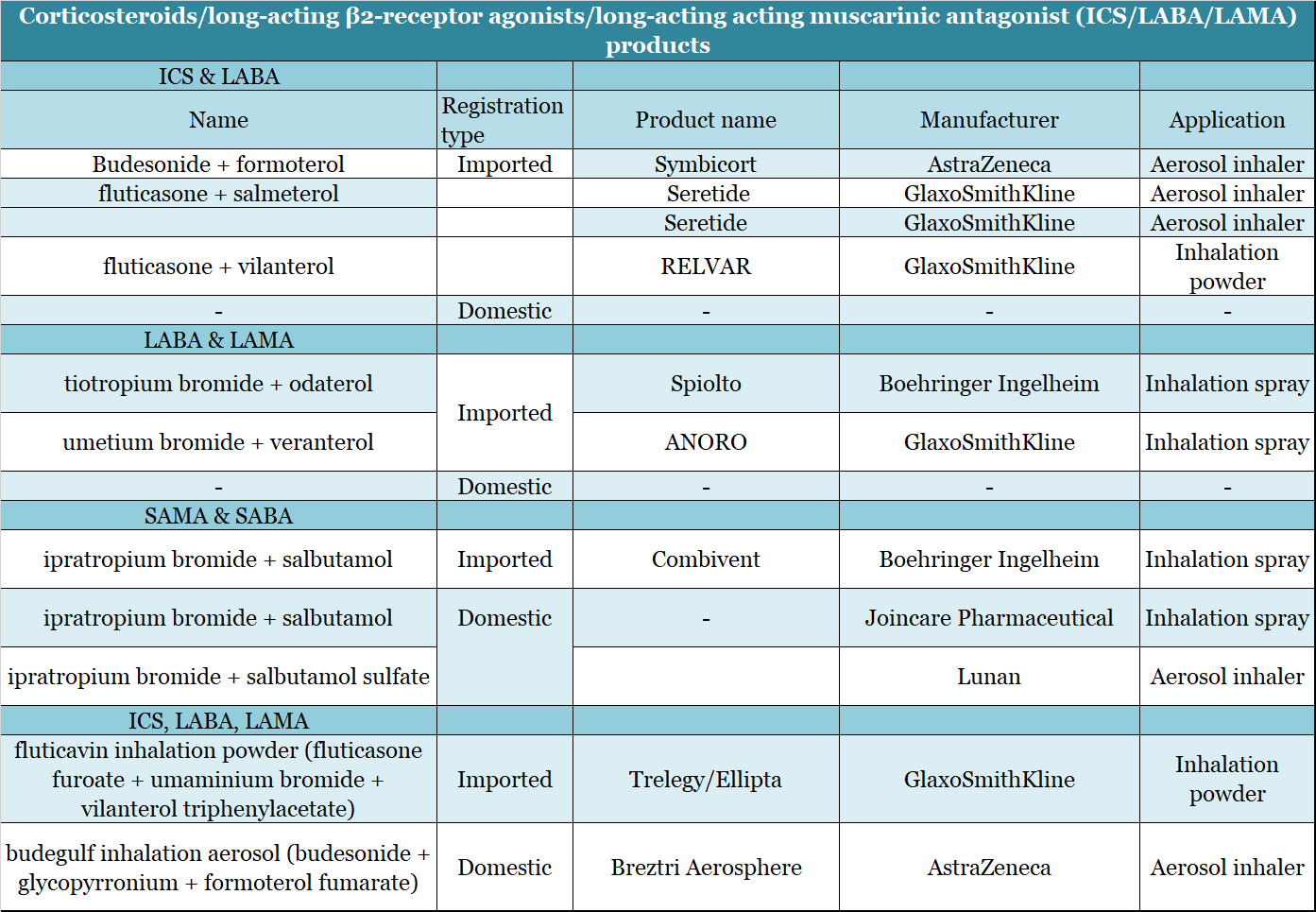 Drugs that are useful for treating asthma but have no obvious effect on COPD mainly include leukotriene receptor antagonists (LTRA), short-acting β receptor agonists (SABA), theophylline drugs, and antibody drugs.

According to data from Minai.com, in 2018, the sales of end-user montelukast in China’s urban public hospitals, county-level public hospitals, urban community centers and township health centers were RMB 2.841 billion, an increase of 17.29%. Among them, Singulair, Merck has a market share of 66.26%, Lunambate accounts for 18.99%, and Otsuka Pharmaceutical accounts for 14.75%. 【6】

However, the updated GINA2019 guidelines mention that for safety reasons, it is no longer recommended to use short-acting β2 receptor agonists (SABA) alone. Instead, it is recommended that all adults and adolescents with asthma should use symptom-driven use (in mild Asthma) or regular daily use of medications containing low-dose inhaled corticosteroids (ICS) to reduce the risk of severe acute exacerbations. As a result, the beta-agonist market may decline and be replaced by inhaled glucocorticoid (ICS) drugs.

In 2018, the sales of doxofylline drug salbutamol was US$51.82 million, ranking fourth in the asthma market in China. GlaxoSmithKline’s salbutamol sulfate aerosol Ventolin’s global sales in 2018 was US$1 billion. However, there are many domestic Chinese manufacturers and the competition is fierce.

Currently listed in China is Novartis’ Xolair (omalizumab), but its cost is still at a relatively high level, about US$587 per tube.

Dai Youwen is the regional business development director of MyBioGate China. He focuses on collaborations between China and overseas companies in the medical and health fields, as well as maintaining close contact with listed Chinese pharmaceutical companies to gain insight into cross-border collaboration trends.

【5】Which is the first domestic company to break through the domestic respiratory inhalation market? Insight database