At the moment when venture capital funds are active in the field of biomedicine, oncology drug research and development companies have sprung up, but the CNS sector has received relatively little attention. The pace of life of contemporary people is getting faster and faster, pressure from work is increasing, and the incidence of mental illnesses such as insomnia, anxiety, and depression is also on the rise. MyBioGate will focus on research on neurological drugs this month. We will also review the market and investment opportunities in China and abroad, especially drugs that target the central nervous system (CNS). 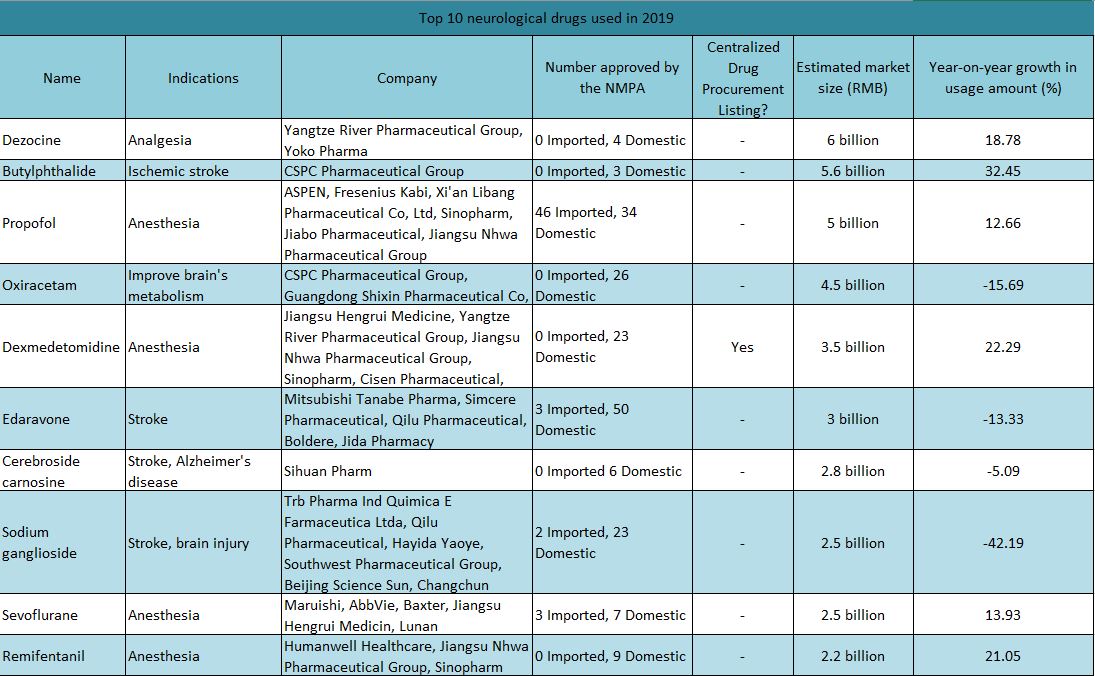 In 2019, the market size of terminal analgesics in public medical institutions in China was close to 18.4 billion 【2】. There were 3 pharmaceutical companies with sales exceeding RMB 1 billion. In 2019, total sales exceeded RMB 10.4 billion, and the market share also rose to about 57%. Among the top 3 companies are Bayer and domestic companies, namely Yangtze River Pharmaceutical Group and Jiangsu Hengrui Medicine.

Dezocine injections are Yangtze River Pharmaceutical Group flagship products in the field of painkillers. It enjoyed a rapid rise 2015-2017, which slowed 2018-2019. Recently, many provinces have announced the “clearance and withdrawal” rules for local medical insurance. It is expected that the future sales of dezocine injections will be affected to a certain extent. In addition, at the end of 2019, Yoko Pharma’s 6 generic drugs have also been approved for listing.

Butylphthalide as a Class 1 innovative drug within the stroke market

Butylphthalide, CSPC’s blockbuster product, bought its patent from the Chinese Academy of Medical Sciences for RMB 50 million in 1999, and was approved to be listed on the NMPA in 2005. The trade name is Enbipu, becoming the first Class 1 innovative drug in the field of cardiovascular and cerebrovascular medicine in China. In the past five years, the sales revenue of butylphthalide has increased from RMB 1.7 billion in 2015 to RMB 5.6 billion in 2019. It is expected to exceed RMB 6 billion in 2020.

Propofol diluted in an emulsion of medium- and long chain-triglycerides are fast and short-acting intravenous anesthetics. They are widely used in perioperative anesthesia induction, anesthesia maintenance, and sedation in ICU wards. The sales scale of propofol injection in the sample hospitals in 2019 was RMB 1.525 billion 【4】. The original researcher Fresenius Kabi still accounted for the largest market share, and Jiabo Pharmaceutical accounted for 10.16%. The national market size of propofol is estimated to be around RMB 5 billion.

On October 9, 2020, the official NMPA website issued an approval document. Jiangsu Nhwa Pharmaceutical Group declared the “Propofol diluted in an emulsion of medium- and long chain-triglycerides Injection” in 4 categories of the new registration classification. 12 additional companies are in the midst of the application process. Among them, Yangtze River Pharmaceutical Group, Brilliant Pharmaceuticals, Jiangsu Hengrui Medicine, and others have declared similar products.

Oxiracetam is only available in Asia, with sales exceeding RMB 5 billion

Oxiracetam is a brain metabolism improving agent. It and similar drugs can promote the synthesis of phosphorylcholine and phosphorylethanolamide, promote brain metabolism, and stimulate specific central nervous pathways through the blood-brain barrier to improve intelligence and memory. The function is mainly used for memory and intellectual impairment caused by mild to moderate vascular dementia, senile dementia, and brain trauma.

However, in 1995, Oxiracetam was not approved by the FDA because it failed its phase II clinical trial. The AD treatment guidelines issued by the European Association of Neurological Societies in 2010 also pointed out that there is currently insufficient evidence to support the use of these drugs to prevent or treat AD. At present, Oxiracetam is sold only in Asia, mainly in China and South Korea.

According to PDB data, the sales of oxiracetam in a sample of Chinese hospitals in 2019 were RMB 1.280 billion, a year-on-year decrease of 13.84%, but the actual sales forecast is still RMB 5 billion. There are nearly 10 domestic oxiracetam manufacturers, of which the top 3 sales are CSPC Pharmaceutical Group (41.60%), Guangdong Shixin Pharmaceutical (22.35%), and Harbin Medisan (20.49%).

Dexmedetomidine can keep the patient in a state of sedation that preserves consciousness without causing respiratory depression. Orion Pharma (Finland) and Abott (U.S.).  conducted the original research, jointly developing an α2-adrenergic receptor agonist. It was approved by the U.S. FDA in March 2000 under the product name is “Precedex”, which is not listed in China. In 2009, Jiangsu Hengrui made the first generic of this drug and was approved to be marketed in China. In 2019, the sample data hospital market share was RMB 1.019 billion, a year-on-year increase of 17.85%. The market is mainly occupied by Jiangsu Hengrui Medicine (51.43%), Yangtze River Pharmaceutical Group (36.07%) and Jiangsu Nhwa Pharmaceutical Group (7.07%). In December 2018, the “4+7” centralized procurement of drugs was launched. Among dexmedetomidine manufacturers, Yangtze River Pharmaceutical’s dexmedetomidine hydrochloride injection (2ml:0.2mg) won the bid, and the winning price was RMB 532/4 pieces (RMB 133/piece). Hengrui Medicine’s dexmedetomidine hydrochloride injection has not yet been evaluated for consistency, so it could not participate in the bidding. Since only Yangtze River has entered the centralized procurement phase, the competitive environment is very favorable for it open up the market. The market share in the first year exceeded 36%.

Edaravone was developed by Mitsubishi Tanabe and was launched in Japan in 2001. Simcere’s edaravone (trade name: Bicun) was approved for marketing in China in 2003. It was the first generic drug for the treatment of stroke and the first edaravone injection approved for marketing in China. National sales in 2019 were RMB 937 million, accounting for 18.6% of the company’s total revenue. At present, more than a dozen domestic Chinese pharmaceutical companies, including Simcere Pharmaceutical, Boldere, China Resources Double Crane, Yangtze River Pharmaceutical, and Qilu Pharmaceutical, have obtained production approval for edaravone injections, all of which are indicated for strokes. However, 9 manufacturers that have applied for consistency evaluation include Simcere, Qilu, Boldere, and Yangtze River.

In July 2020, the listing application (acceptance number: CXHS1800032) of Simcere’s Class 1 new drug “Edaravone dextrocampine injection” was changed to “under review”. It was officially approved for listing on the 29th. Edaravone dextrocampanol injection is a Class 1 innovative drug with independent intellectual property rights developed independently by Simcere after 13 years of research and development. The drug has two active ingredients in a 4:1 ratio ( Edaravone and dextrocampanol). The application of these two components can eliminate free radicals, provide anti-inflammation and improve the permeability of the blood-brain barrier. Other multiple mechanisms of action can significantly reduce and improve acute ischemic stroke induced brain nerve damage 【6】.

Regulation has restricted the use of cerebroside carnosine and ganglioside sodium, resulting in significant market decline

On July 1, 2019, the first batch of national regulated drugs was announced. Among the 20 varieties, gangliosides, oxiracetam, and cerebroside carnosine, were in the top sales of nervous system drugs all year, were listed. Due to the introduction of policies such as supplementary drug supervision and medical insurance control fees, these drugs have seen a significant decline in sales in the past two years. Among them, the decline in gangliosides was the most obvious among the 10 products, with a year-on-year decline of 42.19%. The top five manufacturers of gangliosides are Qilu Pharmaceutical (60.03%), Hayida Yaoye (14.22%), Southwest Pharmaceutical Group (7.16%), Cisen Pharmaceutical (5.73%) and Changchun Xiangtong Pharmaceutical (5.10%). While cerebroside and carnosine fell by 5.09%, the market is exclusively owned by Sihuan Pharm.

According to the latest sample data of hospitals in Chna in 2019, it achieved a year-on-year growth of 13.93%. Jiangsu Hengrui ranked first with a market share of 58.69%, followed by Maruishi with a market share of 20.81%. The export of Jiangsu Hengrui’s sevoflurane preparations is worthy of attention. The announcement on the evening of November 15, 2015 stated that the company’s product “Sevoflurane for inhalation” has received US FDA certification【7】. It is now the third sevoflurane company in the United States. Domestic Chinese brokerages predict that Hengrui’s sevoflurane will occupy 20% of the US market and contribute more than RMB 100 million in profits to the company.

On December 2, 2018, Humanwell Healthcare (600079.SZ) issued a temporary announcement stating that it did not export any fentanyl substances (intermediates, raw materials or preparations) to the United States.

Fentanyl is an opioid receptor agonist. It is a potent narcotic analgesic whose pharmacological effects are similar to morphine. The potency of fentanyl is 60-80 times that of morphine. Sufentanil was synthesized in 1970 and remifentanil was synthesized in 1990. The potency ratio of fentanyl, sufentanil and remifentanil It is 1:12 and 1:1.2. Sufentanil is especially suitable for cardiovascular anesthesia due to its more stable cardiovascular effects, while remifentanil drug elimination is not affected by liver and kidney functions. Sufentanil and remifentanil have grown rapidly in recent years, especially in small hospitals, which have become important markets for both. According to the data on the chemical drug terminal competition pattern of public hospitals in key cities of Minai.com, Humanwell Healthcare occupies more than 70% of the market for sufentanil and more than 90% of the market for remifentanil. It was approved for listing in September. In the future, Humanwell, Jiangsu Nhwa, and Sinopharm are expected to jointly expand the market.

The fields of anti-epilepsy, anti-depression, and anti-psychopathy ushered in domestic substitutions

In the anti-epileptic drug market, the top 3 drugs are sodium valproate, levetiracetam, and oxcarbazepine. They have been respectively approved by foreign pharmaceutical companies such as Sanofi (Dabajin), Ushibi (Kaiplan), and Novartis (Qulai). In the antidepressant market, the top 3 drugs escitalopram, sertraline, and venlafaxine are dominated by Lingbei Pharmaceutical (Lexpro), Pfizer (Zoloft), and Pfizer (Innos) respectively. Eli Lilly’s duloxetine (Xinbaida) along with Danish Lingbei Pharmaceutical’s escitalopram oxalate tablets ranked first in sales. In the field of antipsychotics, the top 3 drugs are olanzapine tablets, dexmedetomidine hydrochloride injections, and quetiapine fumarate tablets. Hausen surpassed Eli Lilly to dominate the olanzapine market, and Jiangsu Hengrui Pharmaceuticals dominates the dexmedetomidine market.

On the whole, the above three fields are lead by foreign companies and replicated by local Chinese companies, eventually leading to local companies to seize the market. The anti-epilepsy, anti-depression, and anti-psychotic fields will attract many market opportunities.

Dezocine (analgesia) and butylphthalide (stroke) are the exclusive blockbuster products of two large domestic pharmaceutical companies, Yangtze River and CSPC. Medical insurance payment and sales promotion have kept the market growing steadily. Yoko Pharma was approved for listing in November last year. On June 2 this year, its butylphthalide injection was submitted for listing application under the registration classification of 2.2 and was accepted by CDE.

Neurological auxiliary drugs such as oxiracetam, gangliosides, cerebroside carnosine, and others are affected by national policies, and the market has further shrunk. Really effective brain metabolism improvers have always had broad market opportunities. The research and development of Alzheimer’s disease is being fully developed.

As the only top 10 that has entered the centralized procurement, Yangtze River has divided up 30% of Hengrui’s market in one year, which shows its rapid growth rate. Furthermore, Yingke Biopharmaceutical became the first propofol reviewed company last week and will inevitably put tremendous pressure on Fresenius Kabi, who has been monopolizing the propofol market for a long time.

Youwen Dai is the Regional Business Development Director at MyBioGate. He focuses on collaborations between China and overseas companies in the medical field and maintains close contact with listed Chinese pharmaceutical companies. Thus, he gains insights into the trends of cross-border cooperation.