Age-related macular degeneration (AMD) is a serious and irreversible cause of visual impairment. It is also a leading cause of blindness among the elderly. As populations in China and around the world age, it is estimated that the number of cases worldwide will increase to 288 million by 2040. There are huge unmet clinical needs in the field. Preparations to treat vascular endothelial growth factor (VEGF) are currently the first-line treatment for AMD. Such drugs have shown to be likely to reduce the chance of blindness in neovascular AMD. This article briefly introduces the AMD market and clinical research on VEGF inhibitors with the purpose of providing some potential direction for drug research and development in this field in China.

In the past ten years, AMD has affected approximately 30% of the elderly in the world, mostly in people over 50 years old, and occasionally in people 40-50 years old. Epidemiological surveys show that AMD accounts for causing about 8.7% of blindness in the world. There are about 30 million AMD patients worldwide, with about 500,000 of that number subsequently becoming blind every year. The prevalence of early AMD in people over 50 years old in China is between 1.7% and 9.5%, and the prevalence of late AMD is between 0.2% and 1%. The prevalence of AMD increases with age. As the population in China and the rest of the world ages, it is expected to lead to a significant increase in the prevalence of AMD. It is estimated that by 2040, the number of global cases will increase to 288 million. Advanced AMD is a serious disease, and there is an urgent clinical need for drugs to improve the damage done to visual functions and to delay the progression of advanced AMD. Thus, AMD has become a hot area for new drug research and development.

At present, the pathogenesis of AMD is not fully understood. It is generally considered to be the result of the interaction between genetic factors and environmental factors. Aging, metabolic slowing, and oxidative damage lead to the thickening of Bruch’s membrane and the deposition of lipofuscin, the formation of drusen, and chronic inflammatory stimuli. This combination of factors results in early AMD. As the course of the disease progresses, inflammation and other reactions continue to magnify, which can lead to mid-term AMD. Early AMD patients have a low risk of progressing to advanced AMD within 5 years, but patients in the intermediate AMD stage have a significantly higher risk of progressing to advanced AMD. Advanced AMD can be manifested as geographic atrophy involving the center of the macula, or neovascular age-related macular degeneration (nAMD) characterized by choroidal neovascularization, bleeding, and exudation. 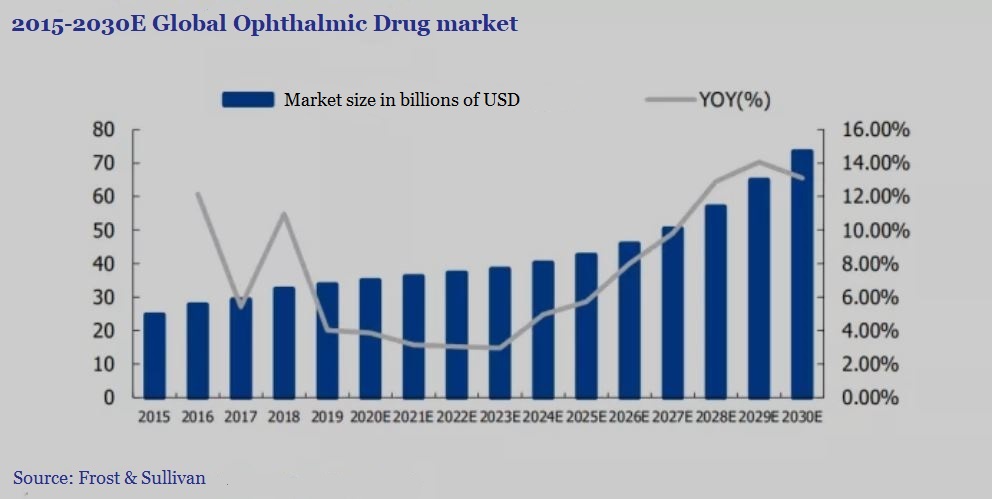 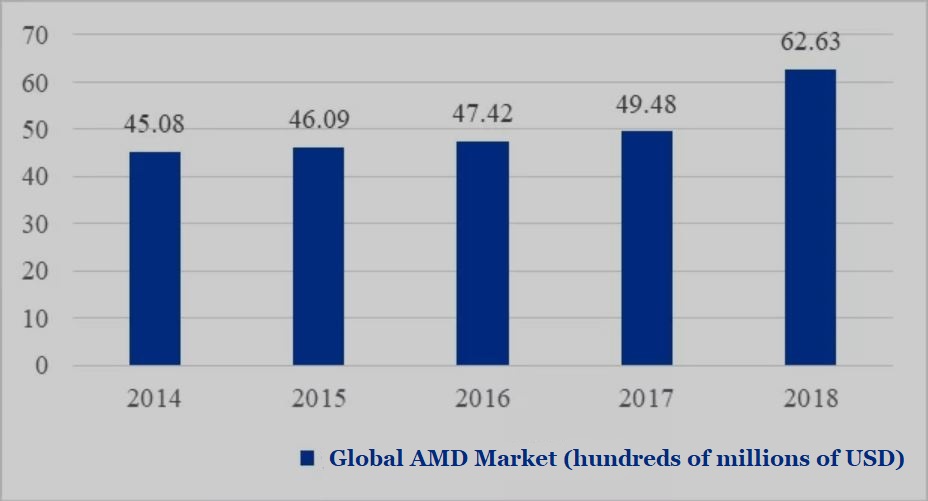 Traditional therapies for neovascular AMD such as photodynamic therapy and laser photocoagulation can only be used to preserve vision. With the continuous breakthrough and development of treatment methods, drugs for treating VEGF can stabilize and improve the visual function of neovascular AMD patients to a certain extent. Intracavitary VEGF therapy has been shown to be very effective in the treatment of neovascular age-related macular degeneration and may significantly reduce the incidence of visual impairment.

Ranibizumab was jointly developed by Genentech and Novartis, a subsidiary of Roche. Its first batch for the treatment of neovascular eye disease was launched in the United States. Ranibizumab was rated as one of the top 10 scientific and technological breakthroughs of the year by Science magazine in 2006 for its excellent clinical performance not only blocking the disease’s progress, but also from improving or restoring patients’ vision. The variety was approved to be listed on the Chinese market at the end of 2011 at an initial price of RMB 9,800. Although the price was high, it brought new treatment options to domestic Chinese patients. In 2012, sales in China were close to RMB50 million.

Conbercept was launched in China in 2013 with sales continuing to increase after the launch. Sales reached RMB 74 million in 2014 and RMB 618 million in 2017. Judging from the current domestic Chinese market share, conbercept, ranibizumab and aflibercept have formed a tripartite.

How did the domestic Chinese produced variety conbercept break into the market and occupy more market share? Frequent injections are a common reason for patients with wet AMD to give up treatment. In contrast, conbercept has fewer injections with a comparative curative effect.

Another aspect of conbercept’s success is the price advantage. When using standard treatment methods, the annual cost of ranibizumab with medical insurance in China is RMB 68,400, while conbercept is RMB 33,300. Coupled with the approval of new indications, it may quickly occupy more of the Chinese market share.

At present, there are a large number of AMD companies in China, but the majority of them are in clinical phase I with a long way to go before going public. Among the researched varieties, the fastest-growing one is voronib (CM082) from Betta Pharmaceuticals, which has entered clinical phase II.