Non-small cell lung cancer (NSCLC) accounts for 80-85% of all lung cancer cases. About 20% of newly diagnosed NSCLC patients are early stage, about 25% are locally advanced, and 55% have developed distant metastases. The 5-year survival rate of NSCLC patients is very low.

After decades, with the development of molecular biology, the treatment of NSCLC has also moved towards more precise methods. From initial radiotherapy and chemotherapy to targeted drugs, advances in medicine have brought more treatment options to lung cancer patients. 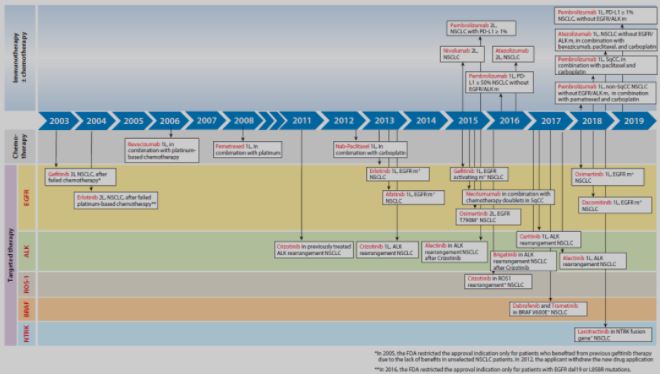 Targeted therapies for NSCLC have been marketed

The principle of targeted therapy is to specifically target a specific molecule involved in tumor growth, progression, or migration. For NSCLC, the most common therapeutic targets include EGFR, ALK, ROS1, BRAF, NTRK, KRAS, HER2, c-MET and RET. 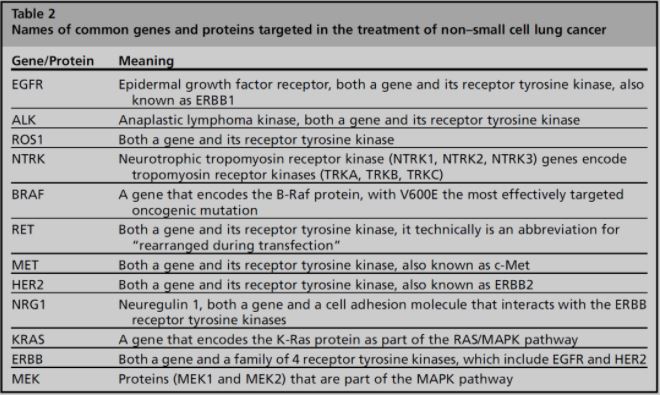 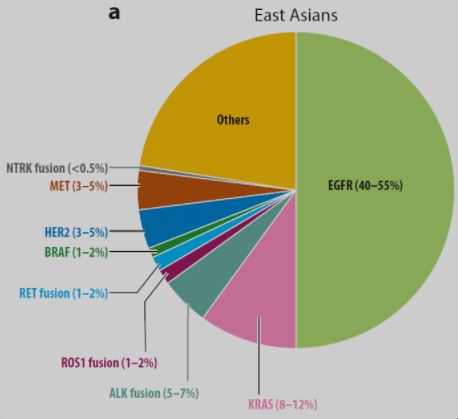 EGFR mutations are the most common driver genes for NSCLC. About 17% of NSCLC patients have EGFR mutations, and the mutation probability in Asian countries such as China is as high as 38.8%. The deletion mutations involving Exon 19 and the L858R point mutation are usually called classic activating mutations, which causes EGFR to exist in a state of high activity. This results in the signal being continuously transmitted downstream.

According to the target, binding site, inhibition mechanism and clinical drug resistance performance, EGFR-TKIs are mainly divided into three generations.

The first-generation EGFR-TKIs are suitable for first-line therapy of NSCLC. For the screening of lung cancer patients with EGFR mutations, EGFR inhibitors are better than traditional chemotherapy drugs. Compared with platinum-based dual therapy, the median progression-free survival (PFS) of the first-generation EGFR inhibitor gefitinib or erlotinib was 11 months versus 5.6 months, and the median overall survival (OS) 25.8 months versus 26 months.

Both gefitinib and erlotinib entered the Chinese market in 2007 and are currently included in the national medical insurance catalog as a Class B drug.

Icotinib is marketed and sold by Betta Pharmaceuticals in China and is currently included in the national medical reimbursement list as a Class B drug. The efficacy of icotinib on advanced NSCLC is roughly equivalent to that of gefitinib, and its safety is better than that of gefitinib. The PFS is 4.6 months. As a local Chinese player in the non-small cell lung cancer market, Betta Pharmaceuticals’ icotinib (Kemena) broke the monopoly within the non-small cell lung cancer drug market that had been previously held by imported drugs.

The development logic of the second generation of EGFR-TKIs is to expect drug resistance to appear later, or even not at all, while ensuring the efficacy of the drug. Afatinib is a second-generation EGFR-TKI, the first TKI that can prolong the survival of the most common EGFR-mutated lung cancer patients compared with the best chemotherapy regimens. When compared with the first-generation EGFR-TKI gefitinib afatinib reduces the risk of lung cancer progression and the risk of treatment failure by 26%.

Osimertinib started being covered by the Chinese national medical insurance in 2018, resulting in the monthly cost reducing from RMB 51,000 to RMB 15,300. After medical insurance reimbursement, the total cost for patients was only a few thousand RMB per month. Therefore, in terms of price, domestically produced ametinib has a great disadvantage compared to osimertinib. It is expected that ametinib will enter the medical insurance as soon as possible reduce some of its current price disadvantage.

ALK rearrangement was first discovered in 1994 in apoptotic large cell lymphoma, and later in a small number of NSCLC cases. The incidence of ALK rearrangement in NSCLC is 3-13%. ROS1 gene rearrangement is a new independent subtype in the molecular mechanism that causes non-small cell lung cancer with a mutation frequency of 1%-3%. Because ROS1 and ALK have a high degree of homology in the kinase domain, ALK-TKI has a better therapeutic effect on patients with ROS1 fusion gene positivity.

The first-generation ALK inhibitor, crizotinib, was the first ALK inhibitor approved by the FDA and has a high targeting effect on MET and ROS1. Compared with platinum-based therapy, crizotinib has demonstrated excellent therapeutic effects, with excellent ORR and PFS data.

Roche’s Alectinib is a leader in the second generation of ALK inhibitors. It extends the median progression-free survival time to 34.8 months, which is nearly three times the current treatment rate, and can reduce the risk of brain metastases in patients by 84%. It also reduces the risk of disease progression or death by more than half.

Loratinib is a third-generation drug targeting ALK, designed to overcome all known ALK resistance mutations and pass the blood-brain barrier.

As a new generation of ALK inhibitor, the advantages of loratinib are:

The vascular endothelial growth factor (VEGF) is the most important pro-angiogenic factor that can induce angiogenesis in the body. VEGF plays an important role in the occurrence of ophthalmic diseases such as tumorigenesis and wet macular degeneration. Angiogenesis is a necessary process of tumor occurrence, growth and metastasis, and it is also one of its important biological signs. Increased VEGF expression often indicates a poor prognosis.

Anlotinib is an independent brand in China. It was launched in May 2018 and was marketed by CP Tianqing. It has now been included in the national medical insurance catalog as a Class B drug. Anlotinib provides a new option for the third-line treatment of advanced NSCLC in China.

In China, bevacizumab was approved for marketing in February 2010, and its price was maintained at around RMB 5,100 per tube for many years. In 2017, bevacizumab entered the national medical reimbursement list through national negotiations, and its price dropped to about RMB 2,000 per tube. Since the patent protection of bevacizumab in China expired in 2018, many domestic and foreign pharmaceutical companies have joined the research and development process of its biosimilar drugs. At present, there are more than 20 domestic companies deploying bevacizumab biosimilar drugs.

NTRK gene fusion is rarely rearranged in NSCLC and other tumor types, and NTRK rearrangement occurs in about 1% of NSCLC patients. NTRK targeted therapy is very effective. Currently, two targeted drugs for NTRK fusion have been approved.

Larotretinib was the first NTRK inhibitor approved by the FDA and has a significant effect on NSCLC. The biggest difference between larotretinib and other traditional tumor drugs is that the entire R&D and clinical trials of this drug are based on one molecule-NTRK fusion gene. Furthermore, it is not specifically limited to a certain tumor.

▲Figure 7: NTRK inhibitors have been marketed for NSCLC treatment

MET is also a relatively common mutation in NSCLC, and the detection rate of the Exon 14 skipping mutation is 3-4%. MET is a kind of tyrosine kinase receptor. Its overactivation is closely related to tumorigenesis, development, prognosis and outcome. Overactivation will lead to the activation of its downstream signal pathways, and ultimately lead to cell transformation, proliferation and resistance to cell apoptosis. This can result in death, promoting cell survival, causing tumor metastasis, angiogenesis and epithelial-mesenchymal transition (EMT).

Three MET drugs have been recognized this year. The three drugs are basically the same in terms of efficacy.

Teotinib, as the world’s first oral MET inhibitor approved for marketing, really makes it of great significance is the characteristics of the MET mutation itself-it is one of the secondary drug resistance mutations of EGFR in patients with lung cancer.

For EGFR mutations, both doctors and patients know that when the first-generation drug is resistant, 50% of patients will develop secondary mutations of T790M and can continue to take the third-generation EGFR-targeted drug for treatment. Among all the secondary mutations, MET occupies a very important position, and about 10% of patients will have secondary MET mutations. For these patients, teotinib has become a good treatment option.

Capmatinib is the first FDA-approved specific targeted therapy for metastatic NSCLC with MET Exon 14 skipping mutations. According to the 2020 V5 NSCLC treatment guidelines, for patients with MET14 mutations, NCCN recommends capmatinib, which was approved by the FDA this year.

The disease control rate of volitinib, the first Chinese produced MET inhibitor, was as high as 95.1%. The data were unveiled at ASCO 2020. Currently this variety has been accepted by China’s NMPA.

Pralsetinib was approved by the FDA in September 2020 for the treatment of adult patients with RET fusion-positive NSCLC. In China, CStone Pharmaceuticals has obtained the development and promotion rights of this innovative therapy. The product is currently in clinical phase II/III.

The approval of RET inhibitors marks another milestone in NSCLC precision medicine.

Only 1%-3% of NSCLC will have BRAF gene mutations, of which 50% are BRAF V600E site mutations. Unlike the EGDR and ALK mutations, BRAF mutations are more likely to occur in patients who smoke. The BRAF V600E mutation was first recognized in melanoma.

At present, the FDA has approved the treatment plan of dabrafenib combined with trametinib. The effective ORR is 64%, the disease control rate is 72%, and the progression-free survival period is 9.7 months.

After the introduction of small-molecule targeted drugs, they have developed rapidly due to their advantages of relatively minor side effects, good tolerance, and outstanding efficacy. NSCLC is already in the era of molecular targeting, and subsequent precision treatments and drug resistance treatments are constantly improving. It is believed that with the continuous emergence of new treatment methods, the treatment level of NSCLC will continue to improve.