In China, the rapid growth of the analgesic market is second only to oncology drugs. As an example, Yangtze River‘s dezocine is an analgesic acting as a κ partial agonist and μ partial agonist. It leads the analgesics market in China with RMB 6 billion in sales. This article will attempt to give some of the history behind prescribing for pain, consequences of overprescribing, as well as showing some recent industry trends in China.

There are 5 common types of pain: acute, chronic, neuropathic, nociceptive, and radicular. In 1996, the American Pain Society (APS) instituted a national campaign stating that there was a national epidemic of untreated pain in American hospitals and announced that pain should be classified as the fifth vital sign after temperature, heart rate, respiratory rate, and blood pressure. This resulted in the adoption of the 0-10 numeric rating scale (NRS) for patients to indicate pain levels. This initiative was known as P5VS for “pain as fifth vital sign”. Meanwhile, the International Society for the Study of Pain (IASP) decided that starting in 2004, they would set the third Monday in October every year as “World Analgesia Day.” Every year, IASP sets a focus for pain relief around the world. For example, 2008 to 2009 was their “Global Year Against Cancer Pain” and 2007 to 2008 was their “Global Year Against Pain in Women” also known as their “Real Women, Real Pain” campaign.

However, major changes have occurred in the perception of pain treatment since the 1990s and early 2000s. The most significant contributor to this change was the rise of the opioid epidemic, as documented by the Center for Disease Control and Prevention (CDC). From 1999 to 2018, deaths from opioid overdoses in the US reached almost 450,000 people, including both prescription and illicit opioids. In 2016, the FDA passed new safety measures “requiring boxed warnings and patient-focused Medication Guides for prescription opioid analgesics, opioid-containing cough products, and benzodiazepines … with information about the serious risks associated with using these medications at the same time.” In 2017, a study was published showing that “measuring pain intensity using uni-dimensional tools like the NRS has not improved pain outcomes”. Finally, in June 2019 the World Health Organization (WHO) updated their statement on pain management guidance. Below is an excerpt from that statement:

“WHO remains fully committed to ensuring that people suffering severe pain have access to effective pain relief medication, including opioids. WHO is concerned that there is very low access to medication for moderate and severe pain, particularly in low and middle-income countries.

WHO also recognizes that the need for access to pain relief must be balanced with concerns about the harm arising from the misuse of medications prescribed for the management of pain, including opioids. Scientific evidence indicates there are risks associated with the use of these medications —such as the development of dependence, overdose and accidental death. Even when prescribed according to established clinical guidelines and patients’ needs, and used as directed, certain factors may increase these risks.” 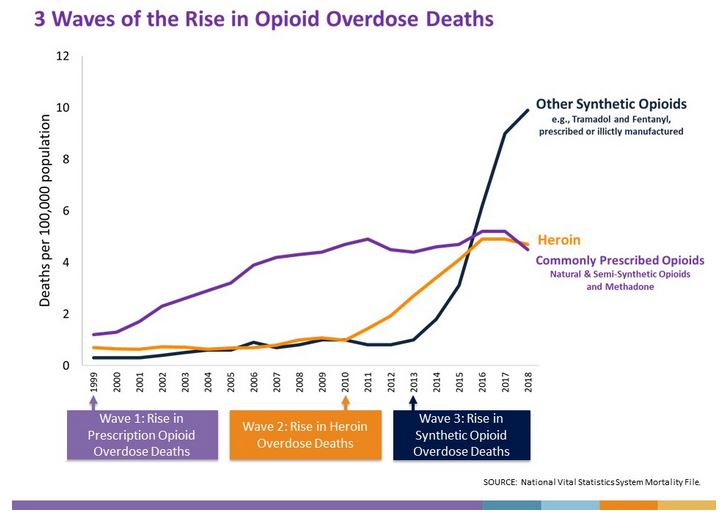 ▲Figure 1: 3 Waves of the Rise in Opioid Overdose Deaths

While perspectives are evolving about treating pain, the fact remains that large numbers of people around the world continue to suffer from pain. Take neck and shoulder pain as an example. According to the data of “Retrospective Analysis of Neck Pain in the Global Population 1990-2017” published in the British Medical Journal on March 26, 2020, the number of people around the world with shoulder and neck pain has increased from 164.3 million in 1990 to 288.7 million in 2017【4】. The Global Burden of Disease study defines neck pain as: pain in the cervical spine that lasts for at least 24 hours. The national annual incidence rate of age-standardized neck pain ranges from 599.6 cases in Canada to 1145 cases per 100,000 people in Norway in 2017. China (1037.7 cases) is second only to Norway (1145 cases) and Iran (1055.5 cases), ranking it third in the world.

▲Figure 2: Annual incidence of neck pain in 2017 by country

Research data shows that women have a higher prevalence and incidence of shoulder and neck pain than men. The prevalence increases with age and begins to decline after the age of 70. Among men and women, the number of patients reached their peaks in the 45-49 and 50-54 age groups, respectively. 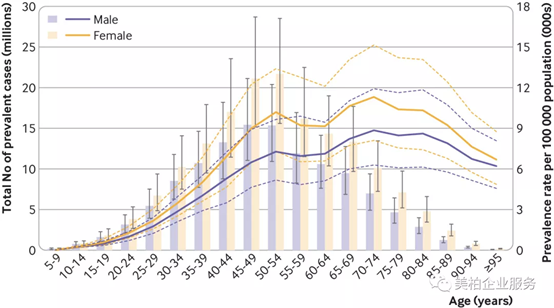 This is of course only one example. However, the fact remains that unmet need remains for responsible and empathetic pain treatment. This article will focus on analgesics, but alternative treatments are available for pain treatment, including over-the-counter anti-inflammatory agents such as ibuprofen, massages, acupuncture, physical therapy, injections and nerve blocks.

In addition to the FDA’s new safety measures released in 2016, on September 6, 2018, the State Food and Drug Administration in China issued an announcement that cold medicines containing codeine were banned for children under 18 years of age. At the same time, in accordance with the “Guiding Opinions on Improving the Centralized Procurement of Drugs in Public Hospitals” issued by the General Office of the State Council, anesthetic drugs and psychotropic drugs can only be purchased in accordance with current national regulations. Anesthetic drugs and Class I psychoactive drugs do not participate in centralized drug procurement. Psychotropic drugs are implemented in accordance with the current national and provincial regulations【6】.

In summary, the author believes that the analgesic market will strengthen the introduction of non-opioid drugs in the future, while centralized procurement will have limited impact, and the market share will change based on the news drugs’ efficacy and side effects.

The latest data from Meinenet shows that the market size of terminal painkillers in China’s public medical institutions in 2019 is close to RMB 18.4 billion【7】. In 2019, the PDB growth rate of sample hospitals was 16% for analgesics, second only to tumor drugs. It is worth noting that there are only 3 pharmaceutical companies with sales of more than RMB 1 billion, namely Yangtze River (dizoxine), Bayer (aspirin), and Hengrui Medicine (butorphanol). The total sales of these varieties exceeded RMB 10.4 billion. Meanwhile, their total market share has also risen to about 57%.

Compared with drugs in other therapeutic fields, most of the above 10 products maintain the unique status of exclusive varieties and few competing companies.

Dezocine injections are Yangtze River Pharmaceutical Group’s main analgesic product. Its sales rose 2015-2017, which then slowed 2018-2019. Recently, many provinces have announced the “clearance and withdrawal” rules for local medical insurance. It is expected that the future sales of dezocine injections will be affected to a certain extent. In addition, at the end of 2019, Yoko Bio in Nanjing had 6 types of imitation products approved for listing. Meanwhile, Tianjin Institute of Materia Medica, Jiangsu Nhwa Pharmaceutical and other companies have successively submitted applications for the listing of similar products.

Aspirin enteric-coated tablets are commonly used drugs for the elderly in China. They are widely used clinically and have created a considerable market share, occupying an important position in antithrombotic treatment and prevention. Aspirin is a kind of NSAID and is a very widely used drug in clinical practices. The market share of the leading company Bayer remained above 80% in 2019, and its sales reached RMB 1.97 billion, a growth rate of 6.93%. The market share of domestic Chinese pharmaceutical company Original Pharmacy in Shenyang increased from 6.81% in 2015 to 9.18% in 2019. In terms of consistency evaluations, Cisen Pharmaceutical and Guilin Pharma submitted supplementary applications. On April 23, 2020, the Shandong Provincial Medical Insurance Bureau issued the “Notice on Organizing the Filling of Part of the Drug Purchase Plan”, announcing the start of volume procurement in the province. The 40 varieties selected included aspirin.

Butorphanol belongs to the second category of psychotropic drugs in China. Butorphanol tartrate injection is Hengrui‘s blockbuster product, which rose to RMB 1.66 billion in 2019. The growth rate in the past two years has remained above 30%. Not only that, Hengrui has also increased the layout of urban public hospitals, with the proportion rising from about 74% in 2015 to more than 80% in the past two years. In recent years, the unit price of this variety has continued to increase. The industry believes that with the adjusted price of Butorphanol winning bids in more provinces, the product sales and gross profit margin will continue to grow in the future.

Propatamol hydrochloride for injection is a prodrug of acetaminophen. After being injected into the human body, it will be hydrolyzed by plasma esterase into free acetaminophen, thereby achieving the purpose of antipyretic and analgesic. Propatamol for injection has been produced on a relatively small scale by domestic Chinese companies and it has never been abe to enter the first-line analgesic market in clinical use. With the advancement of national purchases, the prices of analgesics such as flurbiprofen axetil and dexmedetomidine have been greatly reduced and their use has been restricted. Thus, the market value of injectable propatamol has been refocused.

Profentoine Sustained-Release Tablets are a compound preparation made of the first step non-steroidal anti-inflammatory analgesic ibuprofen (0.2g) and the second step weak opioid analgesic codeine (12.5mg). The product is the exclusive product of Southwest Pharmaceutical, a subsidiary of Chia Tai Tianqing. The sustained-release tablets achieved sales of RMB 450 million, a year-on-year increase of 25%【8】.

Nalbuphine hydrochloride injection is a new class 3.1 new drug approved by Yichang Humanwell in 2013. It is a narcotic analgesic and is mainly used to relieve moderate to severe pain caused by various diseases. Its analgesic effect is close to morphine and it is classified as a second-class psychotropic drug. The product is an agonistic κ receptor. Therefore, it is mainly used for obstetric analgesia.

Pentazocine injections can be administered before surgery or before anesthesia as an auxiliary medication for surgical anesthesia. Dezocine and pentazocine have similar structures. The difference is that dezocine has a new bridged amino tetralin structure. Therefore, dezocine not only has opioid receptor agonism and antagonism, but also inhibits NE reabsorption and the role of 5-HT reuptake inhibitors.

Celecoxib is a COX-2 inhibitor jointly developed by Pfizer/Astellas. It is clinically mainly used to treat osteoarthritis, rheumatoid arthritis, ankylosing spondylitis and acute pain in adults. The drug was first approved by the FDA in 1999 and was approved for marketing in China in 2012 under the trade name Celebrex. The new breakthrough in 2019 reached RMB 237 million, an increase of 4.53% year-on-year. The product was selected into the third batch of national centralized development. CSPC, Baheal Pharmaceutical, Gowell Pharma, and Jiangsu Zhengda Qingjiang Pharmacysuccessfully won the bid.

Youwen Dai is the Regional Business Development Director for MyBioGate. He focuses on overseas cooperation between Chinese and international medical companies. He maintains close contact with listed Chinese pharmaceutical companies, thus gaining insight into the trends of cross-border collaboration in the industry.

【4】Global, regional, and national burden of neck pain in the general population, 1990-2017: systematic analysis of the Global Burden of Disease Study 2017