Migraine is a common neurological disease, which can be chronic. According to the Migraine Research Foundation, symptoms include a severe throbbing recurring pain, usually on one side of the head and at least one of the following: “visual disturbances, nausea, vomiting, dizziness, extreme sensitivity to sound, light, touch and smell, and tingling or numbness in the extremities or face.” Attacks tend to last between 4 and 72 hours. About 15% of the world’s population are affected by migraine, or around 1 billion people. In the United States and China, 39 million and 13 million people suffer from migraine, respectively. Furthermore, migraine disproportionately affects women. According to the WHO’s Global Burden of Disease Study published in 2010, the number of women who suffer from migraine is about three times that of men.

Photo by Anh Nguyen on Unsplash

When it comes to treating migraine, there is a huge unsatisfied market. There has not been much innovation in new migraine drugs for quite some time. The American Migraine Foundation states that triptans, which were developed in the early 1990s, have been the mainstay for migraine relief since that development. They were the first class of drugs developed specially to treat migraines. Unfortunately, they’re not effective for everyone and only treat the symptoms of migraines rather than preventing them.

For a long time, the neuropeptide calcitonin gene-related peptide (CGRP) has been postulated “to play an integral role in the pathophysiology of migraine”. Due to advances from molecular neuroscience research, the role of CGRP is becoming better understood. Thus, the idea of anti CGRP treatments have become more and more popular in the industry.

There are a variety of drugs for migraine treatment. Triptans are the only ones that have been developed specifically for migraine, but there are also ergotamine derivatives, non-steroidal anti-inflammatory drugs (NSAIDs), and certain combination drugs.

Triptans are often the first-line treatment for migraine patients. However, they are an imperfect solution. In certain patient populations the use of triptans is limited due to incomplete effects or recurring headaches. Only about 30% of clinical trial patients experience no pain for a full two hours after taking triptan. In addition, triptans has some related cardiovascular risks. Thus, their use is limited.

The most commonly used prescription drugs for migraine prevention are antiepileptic drugs (such as topiramate), beta-blockers (such as propranolol), and tricyclic antidepressants (including amitriptyline), of which only some attempt to prevent migraine. Unfortunately, most of the side effects of these drugs are dramatic, including cognitive problems, fatigue, lethargy, and weight gain. Furthermore, ergot alkaloids should be avoided by pregnant women due to the drugs’ teratogenicity.

Although there are many drugs that attempt to prevent migraines, with many of them at an affordable price, their efficacy is not satisfactory: the patient response rate is low and migraine attacks are common. While multi-drug treatment can have a stronger effect, patients may avoid taking multiple medications due to side effects.

Therefore, there is still an unmet medical need for new migraine-specific drugs. The breakthrough of CGRP research and related receptor antagonist antibody drugs have been significant in the prevention and treatment of migraine.

With the in-depth study of migraine pathology, it was found that the release level of CGRP significantly increased during migraine attacks, and positively correlating with the degree of headache. CGRP causes intense inflammation in the coverings of the brain, which is often the cause of the pain of a migraine park. Therefore, researchers attempt to inhibit CGRP and its receptors in order to relieve and prevent migraine attacks.

CGRP is a protein that is released around the brain. It exists in peripheral neurons and central neurons and causes migraine. Anti CGRP migraine treatment attempts to normalize CGRP levels.

In recent years, inhibitors targeting CGRP have become the most popular research and development direction for new migraine drugs.

CGRP preparations are extremely well tolerated. In fact, for most people, apart from the pain at the injection site, there seem to be no obvious side effects.

The cost of CGRP targeted drugs to treat migraine is about US$6,900 per year, or US$575 per month. When compared with other types of migraine treatment, the cost may be higher.

The FDA has approved 7 new migraine drugs since 2018, of which 6 are CGRP drugs. The migraine market, driven by CGRP targeted drugs, is expected to achieve substantial growth in the next few years. The scale of migraine drugs may exceed US$11 billion U.S. dollars by 2024, while CGRP drugs specifically may reach US$5 billion by that time.

Erenumab is a fully human monoclonal antibody that prevents migraine by blocking the activity of CGRP. When compared triptan drugs and other CGRP small molecule antagonists under development, Aimovig® has three main elements: once a month, patients can use a syringe to inject themselves; it can reduce the incidence of migraine 50%; and has few side effects.

Ubrogepant, developed by Allergan, was the first oral CGRP receptor antagonist approved by the FDA for anti CGRP migraine treatment.

Rimegepant was originally developed by Bristol-Myers Squibb and then licensed to Biohaven Pharmaceuticals. As the second oral anti-migraine drug, it is more convenient for patients as the medicine is orally disintegrating tablets, meaning patients can take it anywhere. Its long half-life, good oral bioavailability and high affinity for human CGRP receptor make rimegepant a potential best-in-class anti-acute migraine drug. Its 2024 sales are forecasted to be US$897 million.

Eptinezumab from Lundbeck Pharmaceuticals was the first intravenous drug approved by the FDA for the prevention of migraine. It was launched in the United States in February this year. Recently, eptinezumab solution for injection was approved for clinical trials in China. The proposed indication is for the preventive treatment of migraine in patients with dual diagnosis of migraine and headaches induced from too much medication. It is hoped that the follow-up clinical development of this product will progress smoothly and benefit Chinese migraine patients as soon as possible.

Globally, there are over 1 billion people that suffer from migraine, and the market space is huge. Sales of migraine drugs are increasing year by year, reaching US$3.8 billion in 2018. 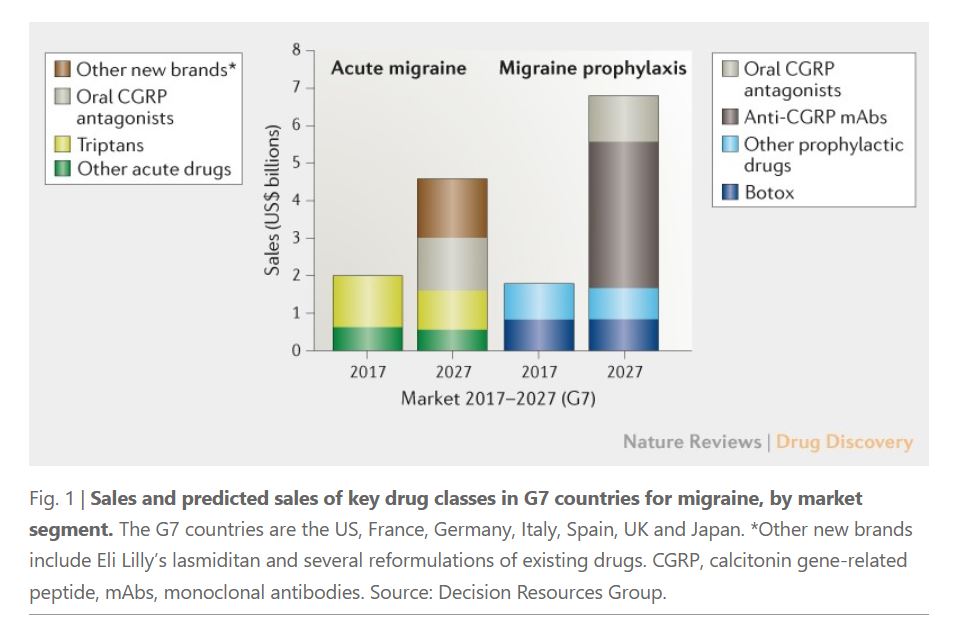 In the acute migraine market, experts estimate that 15-20% of patients will become potential consumers of non-triptan drugs due to intolerability, ineffectiveness, or contraindications. Meanwhile, anti CGRP treatments are expected to experience solid growth due to their continuous efficacy and other advantages mentioned earlier. In particular, the acute migraine market driven by oral CGRP preparations may double in 2027, exceeding US$4 billion.

Currently, these 7 CGRP drugs are not yet marketed in China. Chinese doctors and patients have a high degree of recognition for triptans and ergotamine drugs. In addition, the price of CGRP drugs is relatively high, with the annual cost of monoclonal antibody drugs as high as US$6,000/year. Whether the Chinese market can accept these high treatment costs is questionable. Therefore, for Chinese migraine patients, it is possible that in the next 5-10 years, domestic anti-migraine drugs will still be dominated by triptan drugs.

Taking it to a world perspective, CGRP(R) inhibitors, as an innovative drug, will likely occupy an increasing share of the migraine market based on their good tolerance and bioavailability.