GeneScience and Foresee reach an agreement, filling a gap in the Chinese market for GnRH therapies

Among the three major Chinese GnRHa available, goserelin hormone therapies occupy the largest portion of the market. However, due to current limitations, the ultra-long-acting injections produced on other countries, where one injection occurs in March and one injection occurs in June, have not yet been successfully developed. Thus, the hormone therapies currently on market in China have limits to their application in the palliative treatment of prostate cancer.

Foresee Pharmaceuticals had previously submitted an NDA to the US FDA for their Camcevi™ formulations to treat prostate cancer. 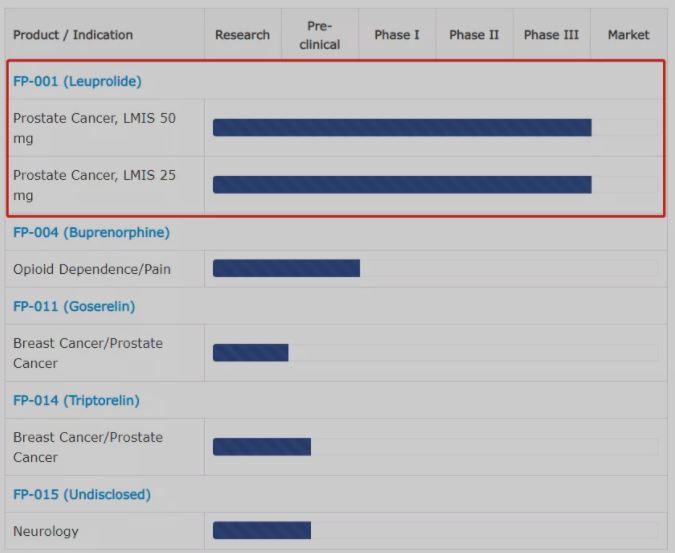 At present, on-market products separate the particulate carrier and the active ingredient into two injection syringes, resulting in a complicated design. Additionally, a complicated mixing step is required before injection. This may cause inaccurate dosage and result in microsomes blocking the needle.

The “SIF sustained-release drug delivery technology” significantly improves the stability of the dosage form. FP-001 50mg can not only be pre-filled in the ready-made monomer syringe, but also has a satisfactory storage shelf life. In other words, Foresee’s self-developed SIF sustained-release injection technology has successfully overcome the technical barriers to preserve and use highly active leuprolide injections that had been in place for about 30 years.

FP-001 50mg is more convenient to use than its competitors, does not need to be mixed before use, and will not cause needle blockage. This product has low manufacturing cost, is convenient to use, high acceptance by clinicians, high patient compliance and remarkable treatment effect.

Gonadotropin-releasing hormone (GnRH) is secreted by the hypothalamus. According to the NIH National Cancer Institute, GnRH “causes the pituitary gland in the brain to make and secrete the hormones luteinizing hormone (LH) and follicle-stimulating hormone (FSH). In men, these hormones cause the testicles to make testosterone. In women, they cause the ovaries to make estrogen and progesterone.”

The three commonly used leuprolides in China are leuprolide, goserelin, and triptorelin. All have a huge market. Among them, leuprolide is the most common type of drug and fastest-growing one for treatment of prostate cancer in China.

In the 1980s, leuprolide was first marketed in Europe, and in the United States in 1989 for precocious (early onset) puberty. Leuprolide entered the Chinese market in 1996. According to Michigan Medicine at the University of Michigan, “leuprolide is used in men to treat the symptoms of prostate cancer (but does not treat the cancer itself). Leuprolide is used in women to treat symptoms of endometriosis (overgrowth of uterine lining outside of the uterus) or uterine fibroids.”

According to IMS data, the total global GnRHa sales in 2019 was US$4.29 billion, with a 7-year compound growth rate of only 2.14%. The market has stabilized, and only the Chinese market is still growing rapidly. Among many GnRHa, leuprolide is the most popular, with total sales of US$2.75 billion in 2019 and a compound growth rate of 2.84% over the past seven years.

In China, the total national sales in 2019 was RMB 6.13 billion, with a compound growth rate of 17.54% over the past seven years. The market is growing rapidly. Compared with the global market, China’s GnRHa market is more concentrated, with sales primarily coming from leuprolide, goserelin, and triptorelin, accounting for 44.44%, 39.19% and 16.36% of total sales respectively. In terms of dosage form, leuprorelin sales almost all come from microspheres.

Due to these high technical barriers, the microsphere field naturally has higher barriers and a better competition pattern. Competition is not particularly intense, the price pressure is small, and the market potential is large. At present, the only microsphere preparations on the market in China are leuprolide microspheres from Livzon and Bont.

In 2013, the drug market of leuprorelin in sample hospitals in 16 key cities in China were Takeda’s “Yinatong”, Beijing Biote Pharmaceutical’s “Bo’enuokang” and Livzon’s “Beiyi”. Each accounted for 58.66%, 23.03% and 18.31% of the market respectively.

In the Chinese market, currently there are few types of microspheres approved for listing. Due to factors such as technology and capital, the microsphere market is far from being opened in China. At the same time, long-acting injections have high technical barriers, low market competition pressure, and very substantial profits. They represent a good potential investment area.