October is MyBioGate’s research month on CNS diseases and drug development. In the last issue of this series, MyBioGate reviewed the top 10 nervous system drugs in China and gave a thorough analysis of the US market for antidepressants. This issue will give review of the Chinese antidepressant market and an analysis of investment opportunities.

Epidemiological trends of depression in China

According to Baidu’s “2020 Civil War “Illustration”-Baidu Mental Health Day Search Big Data”, under the influence of the COVID-19 epidemic, the search for psychological assistance-related content has reached the highest level of the last decade. The search to find treatments for depression has increased by 69%, and the search for depression-related content this year has increased by 59% compared with 2019. During the epidemic, young working women in China aged 30+ are facing two major causes of anxiety: postpartum depression and issues in the workplace.

According to the “Depression and Other Common Mental Disorders Global Health Estimates” released by WHO in 2017, the total number of people suffering from depression worldwide was 322 million【2】. The latest data for 2020 is approximately 350 million. Nearly half of the patients who suffer from depression live in Southeast Asia and the Western Pacific (including India and China). 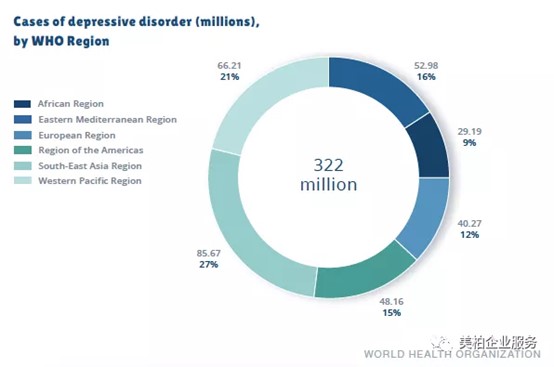 ▲Figure 1: The number and distribution of depression patients worldwide

In 2019, Professor Huang Yueqin from the Sixth Hospital of Peking University and others published a research article in The Lancet Psychiatry, reporting on the prevalence data of depression in the Chinese Mental Health Survey (CMHS). In China, the lifetime prevalence rate of depression is 6.9%, and the 12-month prevalence rate is 3.6%【3】. Based on this estimate, there are approximately 95 million depression patients in China.

▲Figure 2: The number of depression patients in China

It was previously thought that the pathogenesis of depression came from abnormalities within monoamine neurotransmitters. Now it is believed that it may be related to biological rhythms, endocrine, the immune system, neurotrophic and neuroplasticity. Agomelatine tablets have melatonin MT1 and MT2 receptors. The dual mechanisms of agonism and 5-HT2C receptor antagonism regulate human biological rhythms and activate receptors in the human body, which plays an anti-depressant effect. For example, agomelatine tablets from Servier were approved for listing in 2009 and dimensionxin was approved in China in April 2011. In 2019, the FDA also approved Johnson & Johnson’s new antidepressant drug Spravato (esketamine) based on a new mechanism of allopregnenolone for the treatment of postpartum depression. Also approved in 2019 was Sage Therapeutics’ Zulresso (brexanolone, allopregnenolone), which was the first new drug approved by the FDA for the treatment of postpartum depression. Hengrui’s esketamine injection was approved in the same year.

Globally, sales of depression and anxiety drugs account for 45% of central nervous system drugs. It is estimated that the global market size of such drugs will reach US$25 billion in 2020. In China, antidepressants account for more than 20% of the market share of central nervous system drugs. In 2019, the sales of antidepressants in China’s public medical institutions and drugstore retail terminals exceeded the RMB 10 billion mark. The market size of depression treatment drugs in public medical institutions in China was RMB 9.033 billion, a year-on-year increase of 10.93%【4】.

Escitalopram has the largest sales volume, but agomelatine, duloxetine, and sertraline are enjoying high growth rates

As a star product, escitalopram has the largest single-category sales in China. Specifically, Jewim Pharma achieved an increase of RMB 713.17 million, ranking first, and Lundbeck ranked third with a growth of RMB 693.77 million, a fall 21.97% year-on-year. Kelun Pharmaceutical achieved rapid growth at 32.52%.

In terms of growth, Agomelatine’s first domestic Chinese imitation called Hausen achieved a 98.28% increase over the original Servier and duloxetine drugs were represented in the top three in terms of growth rate. Eli Lilly increased 19.35% while NHWA’s Ubilo had 81.71% growth. As the producer product of Qulin, Pfizer continued to achieve a growth of 15.85%, Jingxin Pharmaceutical increased by 21.84%, and the third batch of centralized procurement from Huahai was shortlisted.

Pfizer, Lundbeck, and Eli Lilly ranks in the top three while Hausen, NHWA, and have the fastest growth rates

From the perspective of corporate competition, in 2019 Pfizer, Lundbeck, and Eli Lilly ranked among the top three foreign pharmaceutical companies in China’s antidepressant drug market. That year their market share exceeded 10%, with Pfizer ranking first.【5】. Lundbeck’s other three antidepressant drugs are already on the market in China, including citalopram hydrobromide tablets, flupentixol and melitroxine tablets, and vortioxetine bromate tablets, which were only approved by the FDA in 2017 and approved in China in 2018. It can be seen that both Lundbeck’s mature products and new products form a relatively strong product portfolio. In terms of domestic Chinese growth rates, Jiangsu Haosen Pharmaceutical, Jiangsu NHWA Pharmaceutical, Sichuan Kelun Pharmaceutical, and Zhejiang Jingxin Pharmaceutical lead the top four.

Duloxetine is the drug in R&D pipelines for many companies

From the official website of the Center for Drug Evaluation of the National Medical Products Administration, we can see that there are currently 127 mental disorder-related drugs, of which 32 are under approval. 12 of them are related to antidepressants. Duloxetine hydrochloride is the drug with the most submissions under review, with a total of 15 companies and products.

The success rate of innovative antidepressants is low, but the approval of esketamine similar to that of Hengrui is an opportunity for companies to look for growth points. At the same time, China will also have capital-driven changers like Sage Therapeutics and Intra-Cellular Therapies in the future. New overseas products are being approached and brought into China by the rapidly growing BD army, such as those like MyBioGate. Such cross-border consulting agencies are accelerating industry changes.

Youwen Dai is the Director of Business Development for MyBioGate. He focuses on the cooperation between Chinese and overseas companies in the medical field while maintaining close contacts with listed Chinese pharmaceutical companies. By keeping these contacts, he gains insight into cross-border cooperation trends in the industry.

【3】 “Prevalence of mental disorders in China: a cross-sectional epidemiological study” The Lancet https://www.thelancet.com/journals/lanpsy/article/PIIS2215-0366(18)30511-X/fulltext