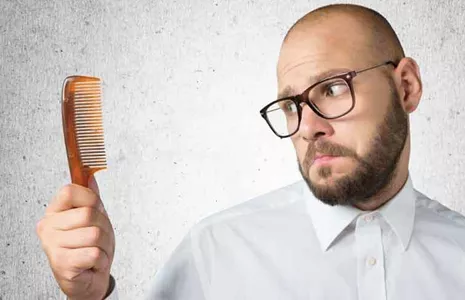 According to a survey released by China’s National Health Commission, there are as many as 250 million people who suffer from hair loss in China. For many, it has become a cause of “new modern anxiety”.

According to the latest data from iiMedia Consulting in 2019 [1], men are more likely than women to suffer from hair loss, representing about 163 million in China. At the same time, more and more women are also experiencing hair loss, accounting for more than 35% or about 88 million. More worrying is that there is a clear trend of younger people with hair loss. 60% of Chinese show signs of hair loss at the age of 25. The main purchases of online hair loss products were mainly born in the 1980s (38.5%) or in the 1990s (36.1%). 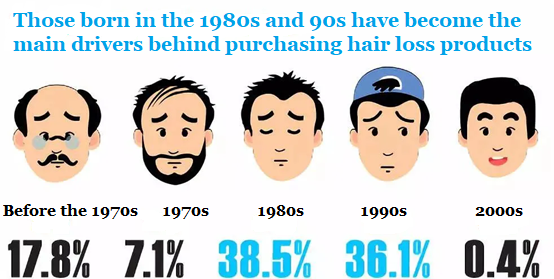 Can minoxidil and finasteride save your hairline?

In recent years, two products approved by the FDA have entered the Chinese market. One is minoxidil for external topical use, which is suitable for both male and female patients. The other is oral finasteride for male patients. The global revenue of these two drugs and derivative products amounts to hundreds of billions of dollars each year.

Minoxidil was originally used to treat high blood pressure, but researchers unexpectedly discovered that the drug can also promote hair growth. Minoxidil was the first FDA approved hair loss drug (1988). It increases the proliferation and differentiation of hair follicles.

Although minoxidil is safe to use, its efficacy is not very satisfactory. Once the treatment is stopped, hair loss will quickly start again.

Therefore, minoxidil is more suitable for patients with early and mild androgenetic alopecia. Usually women respond better than men. Minoxidil is sold at 2% or 5%, but 5% is more effective for men. For female patients, a higher concentration does not necessarily significantly improve the drug’s efficacy and has the potential for unwanted side effects (such as facial hair), so only 2% minoxidil is recommended.

Minoxidil’s brand name is Regaine, which is sold worldwide. Mandi was the first approved minoxidil in China, and Da Feixin was also approved around the same period. In addition, the research also includes gel, minoxidil sulfate solution, oral minoxidil, and others, aimed at enhancing the absorption and efficacy of minoxidil.

Compared to minoxidil, the therapeutic mechanism of finasteride is much clearer. It inhibits the formation of dihydrotestosterone (DHT: dihydrotestosterone; a male hormone) in the scalp by targeting 5α-reductase. When this hormone is over-expressed, testosterone will be converted into DHT by 5α-reductase. The large amount of DHT formed in the scalp will atrophy and degenerate the hair follicles, eventually leading to hair loss.

In a large clinical trial for finasteride [2], 2230 (87.1%) of the 2561 male subjects had observed hair growth, of which 11.1% had a large increase, 36.5% had a moderate increase, and 39.5% had a slight increase. However, recently there have been several reports of irreversible adverse events related to the use of finasteride, and the number of prescriptions for finasteride has subsequently decreased [3].

Dutasteride, which is similar to finasteride, is also a 5α-reductase inhibitor. It entered China in 2011, and a generic version by Sichuan Guowei Pharmaceutical was launched in January 2020. It is worth pointing out that dutasteride was originally approved (except in Japan and South Korea) for the treatment of prostatic enlargement, not hair loss.

Why has dutasteride not been approved yet?

Finasteride is an older drug compared to dutasteride and was patented in the 1980s. In 1992, the United States approved dutasteride as a treatment for benign prostatic hyperplasia, and in 1997 approved it for the treatment of male hair loss. Dutasteride was only patented in 1996 and approved in 2001 to treat prostate enlargement. Due to finasteride’s strong presence in the market, it is even more difficult now to enter. Furthermore, the type I 5α-reductase receptor inhibited by dutasteride is also widely present in the brain, liver and other organs, thus it presents unpredictable risks.

Dutasteride and finasteride have certain side effects, including decreased libido, erectile dysfunction, ejaculation disorders, and other related problems. [4]. The weakened libido typically returns to normal one week after finasteride is stopped. Dutasteride has a longer half-life and a longer recovery period.

From the perspective of reducing side effects, major companies are also actively trying the possibility of topical finasteride [6], such as finasteride spray ALM12845. Although the clinical results did not have a significant advantage over the current version in the market, a marketing authorization application for topical finasteride was submitted in September 2019. It is expected to be officially launched this year or early next year.

JAK inhibitors approved in the United States include Ruxolitinib for the treatment of blood diseases and Tofacitinib, Barictinib, and Upatinib for rheumatoid arthritis. The JAK pathway can promote cell regeneration through stem cell activation, division, and differentiation, thereby awakening inhibited hair follicle development.

The JAK inhibitor that has received the most attention recently is CTP-543. CTP-543 is a deuterated ruxolitinib currently being developed by Concert Pharmaceuticals. Deuterated ruxolitinib have better pharmacokinetics, prolonged half-life and bioavailability, while not affecting the selectivity or efficacy of the receptor.

The Phase II clinical results released by Concert in 2020 showed that compared with the placebo group, subjects who took 8 or 12 mg twice a day achieved more than 75% to 90% hair increase at 24 weeks. Concert plans to initiate a Phase III clinical study of CTP-543 in the fourth quarter of this year, recruiting approximately 700 subjects in the United States, Canada, and Europe. 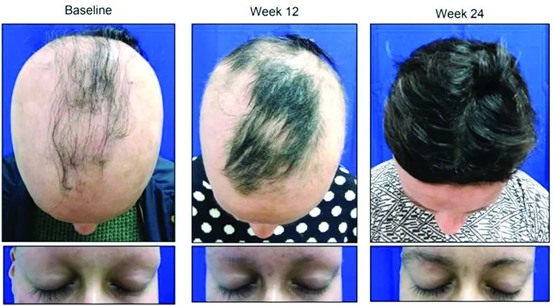 A study showed that botulinum toxin may be an effective treatment for male androgen-induced alopecia. Botulinum toxin can relax the scalp muscles and increase blood flow. The 10 patients in this study each received 5 units of botulinum toxin in 30 parts of the scalp. After 24 weeks, eight of the patients showed good hair growth effects [7]. 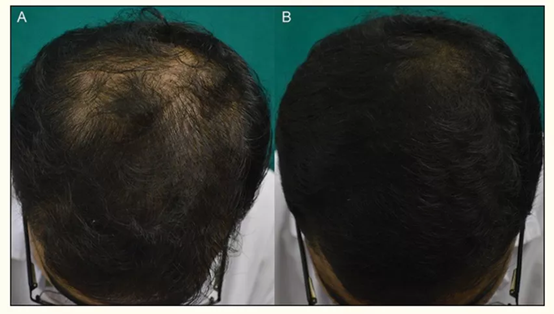 “Follicum believes that its treatment is particularly suitable for women because it stimulates hair follicles in a completely new way.”

Against the background of serious gender imbalance in hair loss products, Follicum, a company located in Sweden, is actively developing a product called FOL-005 for female patients.

FOL-005 is a synthetic peptide based on the human protein osteopontin (related to hair growth). It is considered a potential “first-in-class” treatment and may present strong competition for minoxidil and finasteride. In a clinical study in 2018, the number of hair follicles in subjects with the highest dose increased significantly by 11%. The Phase II clinical trial was launched in June 2020.

The product named CB-03-01 can block the interaction between DHT and the hair follicle androgen receptor, but it is currently approved for acne, not hair loss.

CB-03-01 (1% clascoterone) was approved and become the first acne drug with a new mechanism of action in the past 40 years, which can be applied to both male and female patients. The product for hair loss is 7.5% clascoterone, and the phase II study is planned specifically for female patients. 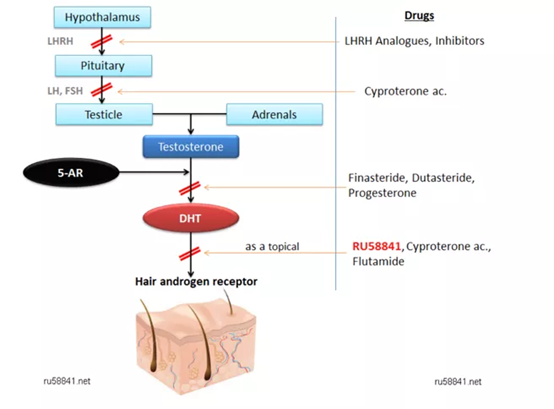 After RU58841 was acquired by a company called ProStrakan, it was renamed PSK3841. In 2005, they applied for phase II clinical trials (ISRCTN49873657). According to a report released by Morgan Stanley, the early clinical results of RU58841 are comparable to finasteride, with a market value of US$100-200 million. However, finasteride already has a strong market presence, oral administration is more convenient than topical application, and the patent for RU58841 is about to expire. Because Prostrakan failed to find a partner for RU58841, they terminated its development due to financial reasons. Now it is only sold in Indonesia.

Latanoprost is a PDF2α analogue, which can promote hair growth [9]. Latanoprost was first used to treat glaucoma. During the treatment, it was accidentally discovered that the length, thickness, and pigmentation of the patient’s eyelashes increased. In 2012, a randomized double-blind controlled preliminary study of 16 patients with androgen-induced alopecia of grade II to III showed that topical 0.1% latanoprost for 24 consecutive weeks can significantly increase hair density [10]. 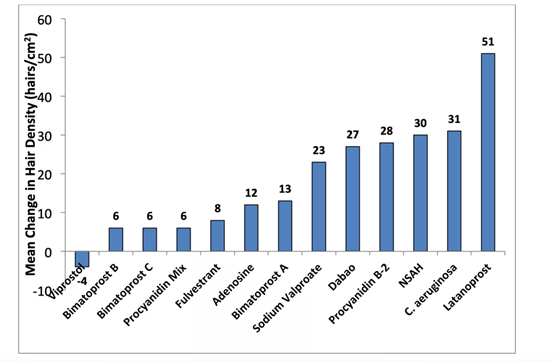 In 2007, the US FDA approved the HairMaxLaserComb®, a device with a wavelength of 655nm for the treatment of male androgenetic alopecia, and subsequently approved the treatment of female patients in 2011. According to the 26-week clinical data of 110 subjects in 2009, the average hair increase of subjects treated with HairMaxLaserComb® was 19.8 roots/cm², while the control group decreased by 7.6 roots/cm²[11].

Normal hair metabolism involves a large number of signaling pathways, including the Wnt pathway. Activating the Wnt pathway can induce endogenous dermal progenitor cells to differentiate into hair swellings, thereby triggering the formation of new hair follicles. SM04554 developed by Samumed can activate this Wnt signal. Currently in phase II clinical trials, the effect of 0.15% SM04554 topical medication is better than 0.25%, but the overall effect is not very obvious.

Dr. Ginger Ding is the Director of Investment Analysis at MyBioGate and an advisor for the Texas Medical Center and Columbia University Consulting Club. She has worked at the Howard Hughes Medical Institute and MD Anderson Cancer Center. During the period, she participated in the preclinical research of tumor brain metastasis which received funding from the National Institutes of Health RO1, Susan G. Komen, and Japan’s Taiho Pharmaceutical.